Senior India batsman Shikhar Dhawan will be leading the country for the second time in his career during the upcoming ODI series against West Indies, starting Friday at the Queen’s Park Oval, Port Of Spain.

He led India for the first time about a year ago on the ODI and T20I tour of Sri Lanka when the Test players were in England. India won the ODI series then but lost the T20Is after a number of players went down with covid-19.

And while Dhawan is the senior player here and the captain, there has been murmurs about his own position in India’s best ODI eleven as the team management prepares for next year’s ODI World Cup at home. 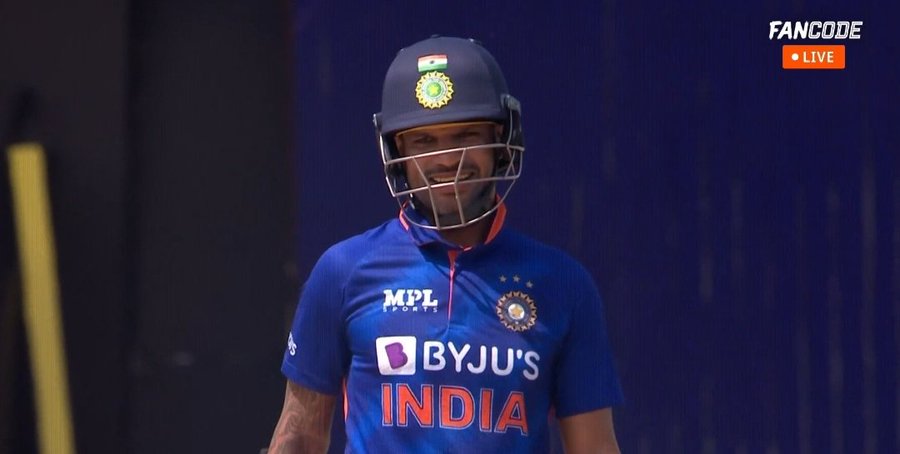 Shikhar Dhawan has been India’s consistent opener in ODIs

Dhawan, who now only plays ODI cricket for India, recorded scores of 31*, 9, and 1 in the recently-concluded series in England. However, since Dhawan only plays one format, his supporters were quick to point out that the left-hander had been rusty, and also that Dhawan is often not given his due credit despite having attained luscious success in the 50-over format in the past decade.

When asked about this question ahead of the first ODI, Dhawan laughingly banished the concerns about his form, saying that he’s been soaking in the criticism for a decade now and has replied it on the field.

“If I had listened to them, I wouldn’t be here. Everyone has their own opinion, but I know what my job is and how I have to do it. I have the experience, so I’m not too worried. As long as I self-analyse and improve, nothing else matters,” the opener added.

In 152 ODIs, Dhawan has scored 6325 runs at an average of 44 with 17 centuries and 35 fifties. He was India’s leading run-scorer at the 2013 Champions Trophy, 2015 World Cup, 2017 Champions Trophy and at the 2019 World Cup had hammered a century against Australia before getting injured.

Being positive, and having self-belief and confidence has been Dhawan’s mantra for success at the highest level for a decade, which is something he wants to infuse in the youngsters alongside him in West Indies.

“I’m a very positive person. For me, positivity is about self-belief and the confidence you take in. I have that since I’ve been playing for so many years. I’m here because I’ve done some good things. That is the positivity I want to pass on to the youngsters,” the opener asserted.

Quiz! Most Runs At No.7 In Men's International Cricket