Interim skipper Shikhar Dhawan starred with the bat in India’s thrilling 3-run victory in the first ODI against the West Indies on Friday at Queen’s Park Oval, Port of Spain.

The left-handed opener’s 97-run knock which came in 99 balls went a long way in ensuring the visitors had a great start, supported by fifties from Shubman Gill (64) and Shreyas Iyer (54), but the West Indies’ bowlers limited the damage later on to restrict India to 308.

The hosts kept up with the required run rate for most time with Kyle Mayers (75) and Brandon King (54) leading the chase while others scored crucial runs around them and built partnerships. It was Romario Shepherd’s late blitz of 39 runs off 25 balls that really made the game close in the death overs. 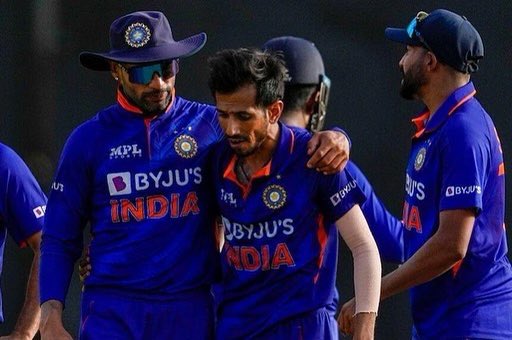 However, tasked to defend 15 runs in the last over, Mohammed Siraj helped India prevail; the equation came down to 5 runs off 1 ball and Siraj kept his calm to nail a yorker on the last ball as Shepherd could only manage a single.

A funny piece of action took place in the 37th over of West Indies’ innings involving the ever-ebullient Shikhar Dhawan. Batsman Brandon King backfoot punched leg-spinner Yuzvendra Chahal toward the cover position where Dhawan dove on the ground to field the ball.

And before throwing the ball back, Dhawan, still laying on the ground, quickly did a couple of push-ups to entertain the crowd who responded with a big cheer. The Indian skipper had a sweet smile on his face after seeing the crowd amused.

Dhawan bagged the Player of the Match award for his 97 runs which set up India’s innings. He said that though he was “disappointed” to fall 3 runs short of what would have been his first ODI ton since the 2019 World Cup, he was happy to see the effort put in by his players to clinch a close encounter.

“Disappointed not to get the 100, but it was a good effort by the team. We good a good score in the end. There were nerves in the end and didn’t expect it to turn that way. We kept our cool and one small change in the end where we pushed the fine leg back and that really helped us. The discussion was to use the bigger side as much as we can and we want to keep on learning and make ourselves better for the rest of the competition,” Dhawan said in the post-match press conference.

The second ODI between the two teams will be played on Sunday at the same ground.