India’s middle-order batsman Shreyas Iyer stroked a brilliant half-century on his return to the ODI side on Friday against West Indies in the first ODI of the series at Queen’s Park Oval, Port Of Spain.

Iyer scored 54 runs off 57 balls and was part of an entertaining 94-run stand from 97 balls with opener and skipper Shikhar Dhawan. Iyer smashed 5 fours and 2 sixes in his terrific knock where he took down spinners with ease.

En route his 54 runs, Iyer also crossed the 1000 ODI run landmark for India, and, doing it in his 25th ODI innings, became the joint second fastest to his milestone. He took only 1 innings more than what both Shikhar Dhawan and Virat Kohli had taken, 24 innings, to register 1000 ODI runs. 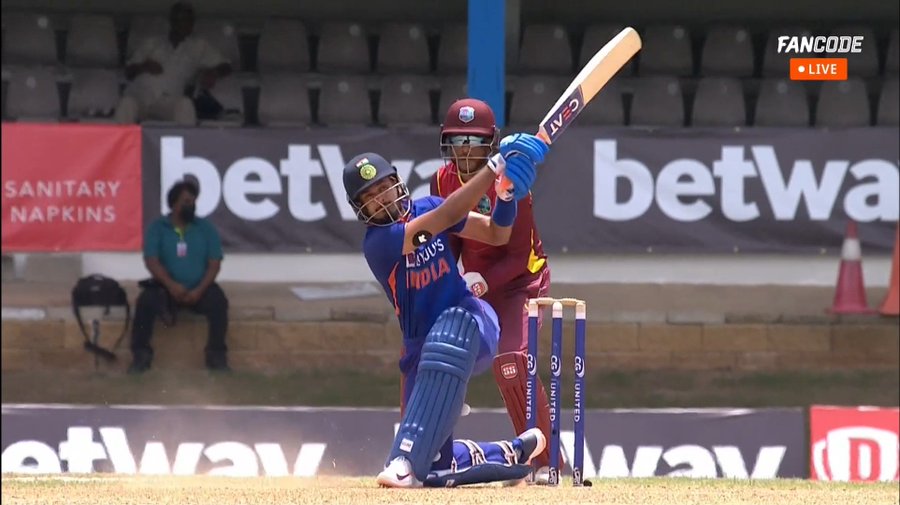 The Kolkata Knight Riders’ captain shares the 2nd spot on the list with former hard-hitting batsman Navjot Singh Sidhu who also reached the milestone in 25 innings. Sitting at the 3rd spot is KL Rahul, who took 27 innings.

Knowing that the West Indies fast bowlers will look to expose his well-known short ball facilities further, Shreyas was ready to face some short stuff. After being slow to get off the blocks, Iyer even got a boundary via a pull shot off the bowling of Jayden Seales, before he upped the ante against the spinners.

Iyer was severe against inexperienced Gudakesh Motie slamming the left-arm spinner for a couple of boundaries. Iyer tore into the West Indian skipper, off-spinner Nicholas Pooran for a couple of sixes and four before cracking another boundary off Akeal Hosein.

High Quality is an understatement for this 50 by @ShreyasIyer15.

Soon after crossing his half-century, however, Motie had his revenge as he dismissed Iyer, but it came via a spectacular one-handed catch by Pooran at cover as Iyer attempted to loft over cover but Pooran jumped high in the air with his right hand up and grabbed the ball stunningly one-handed.

India were 230/3 in the 36th over when the top three had departed and a score of around 350 looked imminent but none of the rest batters could score over 30 and India finished with 308/7.