Indian all-rounder Krunal Pandya and his wife Pankhuri announced the birth of their first child on Sunday, July 24th. The couple shared a couple of adorable pictures on social media with each other and their newborn baby to celebrate the special occasion with their fans.

Krunal Pandya And Pankhuri Revealed The Name Of Their Baby

Krunal and Pankhuri got married in December 2017 after dating each other for many years. Both of them are very active on social media, where they keep their fans updated about their lives. Pankhuri has often been spotted at the stadium, cheering the cricketer during India and IPL games.

Sharing the adorable pictures of their newborn baby, Krunal Pandya revealed the name of the baby – ‘Kavir Krunal Pandya’.

The post went viral in no time and was flooded with amazing reactions from the netizens. From fans, and cricketers to experts, everyone is taking to social media to congratulate the couple on a special day.

Krunal Pandya’s brother and India’s star all-rounder Hardik Pandya also took to social media and congratulated his brother and sister-in-law on the photo-sharing app. The Gujarat Titans (GT) skipper posted a story on Instagram, where he wrote ‘Love you babies’ while tagging both Krunal and Pankhuri. 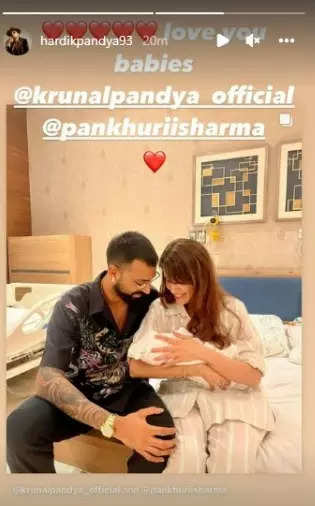 Check out the comments:

Meanwhile, talking about Krunal Pandya’s work front, he recently signed up to play for Warwickshire in the 2022 Royal London Cup. Sharing his thoughts on the same, he said: “I’m extremely excited to get the opportunity to play county cricket and to join such a history Club as Warwickshire.”

“Edgbaston is a special place to play cricket and I can’t wait to call it my home. I hope I can play my part in a successful 50-over campaign with the Club and I am looking forward to meeting my teammates”

The Rilee Rossouw Resurrection: The Ace Up South Africa's Sleeve In A T20 World Cup Year