Senior India pacer Mohammed Shami is currently on a rest. After bowling his heart out on the England tour in Tests and ODIs, Shami was given a break from the entire tour of the West Indies that comprises 3 ODIs and 5 T20Is.

In the meantime, the 31-year-old Uttar Pradesh-born speedster has added a new stylish car to his collection: Shami has bought a luxury sports automobile – Jaguar F-Type to glitter his garage.

The pictures of his new car on Friday on his social media and the same has gone viral with fans swooning over the aesthetically appealing red-coloured Jaguar.

Mohammed Shami is fond of cars and bikes

The remarkable automobile has reportedly cost Shami a whopping Rs 98.13 lakh! It has a powerful V8 331 kW engine that can go from 0 to 100 km/h in 3.7 seconds. The vehicle is equipped with a 2.0-litre turbocharged petrol engine paired with an 8-speed automated gearbox, which provides a smooth driving experience on the road. Shami reportedly himself paid extra to choose “0011” as his vehicle’s registration number as the number on his Indian team jersey is ’11’.

The Director of Shiva Motors, Amit Garg, shared a couple of photos of Mohammed Shami receiving the car in the showroom on his LinkedIn account on Friday. The Bengal seamer can be seen posing in front of his brand new red-coloured Jaguar F-Type; in the other image, Shami is captured gifting a signed cricket ball to Garg.

Check out the images here: 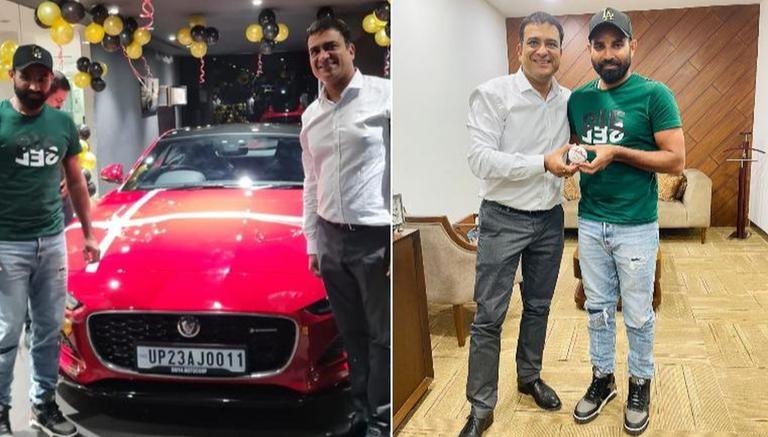 Shami’s Need for Speed is well-known as he often uploaded photos and reels of himself with his grand collection of cars and bikes.

Only last month, he shared a picture of his brand-new Royal Enfield Continental GT 650 earlier last month. On his official Instagram handle he wrote a caption, “Say hello to my new cruising partner #royalenfield #mshami11 #aavade.”

Shami, who won the IPL 2022 title with the Gujarat Titans, is also a proud owner of opulent cars such as the BMW 5 Series, an Audi, and a Toyota Fortuner.

Talking about his recent England tour, it was a bittersweet experience for Shami and the Indian team as they lost the Edgbaston Test but clinched the T20I and ODI series with Shami playing a key role in the latter.

In the Edgbaston Test, Shami wasn’t at his best returning with figures of 2/78 and 0/64 as India failed to defend 378. He bounced back in the first ODI claiming 3/31 but remain in Jasprit Bumrah’s shadow.

What next for Shami?

Well, it is to be seen whether the senior paceman is in India’s plan for the T20 World Cup, and that will be clear if he is selected for the upcoming Asia Cup next month which is in the T20 format. Shami had an outstanding IPL 2022 with the Titans – picking up 20 wickets in the season at a decent economy of 8, and was at times unhittable with the new ball.