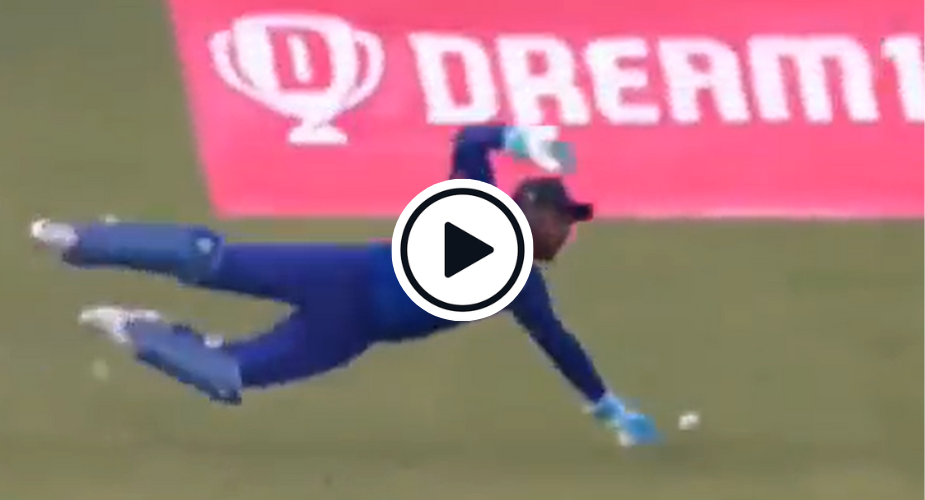 Watch: Sanju Samson produced an athletic piece of wicketkeeping in the final over to help India clinch a narrow win against West Indies in the first ODI at Trinidad on Friday.

The game had rattled along to an exciting conclusion, with the hosts requiring eight runs to win off two balls. Mohammed Siraj was bowling with Romario Shepherd on strike. Siraj, who had been bowling yorkers throughout the over, tried to repeat the dose. On this occasion, though, he speared the ball down the leg side. Shepherd swung at it but just couldn’t reach the delivery. Fortunately for Siraj and India, Samson flung himself full-length to his left and saved the ball from racing away to the fence.

The batters decided against running to keep Shepherd on strike. With the equation reduced to seven runs required off two balls, Siraj held his own. He nailed a wide yorker on the penultimate delivery before cramping Shepherd up with another yorker on the final ball to seal the deal.

A little earlier, India had racked up 309 on the board, largely due to Shikhar Dhawan and Shubman Gill’s contributions. The latter blazed away to 63, with the former falling just three runs short of what would’ve been his 18th ODI hundred. Shreyas Iyer also notched up a half-century, scoring 54 off 57 balls.

In reply, the hosts got off to the worst possible start, with Shai Hope perishing to Siraj. Kyle Mayers held the innings together with a fifty, finding support from Brandon King and Shamarh Brooks along the way. They endured a characteristic middle-order wobble, though, losing Brooks and Mayers in quick succession. King then joined hands with Akeal Hosein and Shepherd. Hosein and Shepherd might’ve even hauled the home side past the finish line had Samson not prevented what seemed a certain boundary in the final over, and swung the tide firmly in India’s favour.

Incredible save by Sanju Samson in the 50th over. pic.twitter.com/ATCWtRBffL

Sanju samson not save only baundry,he will Save the MATCH #Sanjusamson #[email protected] ️ pic.twitter.com/bZvepkkJhV