Axar Patel and Avesh Khan Recreate Yuzvendra Chahal’s​ Trademark Pose: A second-string Indian side clinched the ODI series against West Indies on Sunday, by defeating the hosts in the second ODI by 2 wickets with only 2 balls to spare in their successful chase of 312. This was after the visitors had won the first ODI on the last ball by only 3 runs.

Starting from 2007, this is now India’s 12th consecutive bilateral ODI series victory over the West Indies – a new world record, going past Pakistan’s 11 consecutive ODI series wins over Zimbabwe between 1996 and 2021.

Axar Patel was India’s key man on the day as he smashed 64* unbeaten runs in 35 balls to take India home, completing the chase with a sixer when 6 runs were needed off 3 balls. He had returned with brilliant figures of 9-1-40-1 when West Indies posted 311. 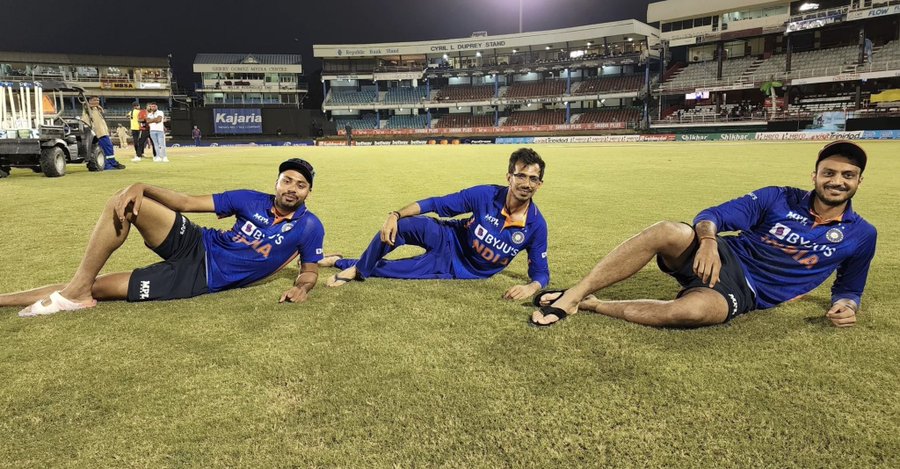 After the game, Axar Patel and debutant Avesh Khan were involved in a fun interaction with leg-spinner Yuzvendra Chahal. The BCCI gave a glimpse of it with a hilarious post – in which all three recreated Chahal’s trademark lying-on-the-ground pose that has become synonymous with Chahal.

“Just Yuzi making others do Yuzi things. A fun interaction between the trio coming soon on BCCI.TV Stay tuned. #TeamIndia | #WIvIND,” the official handle of the Indian Cricket Team captioned its post on Instagram with all three players lying on the ground at the Queen’s Park Oval.

While Axar had a memorable day, Chahal and Avesh were disappointing with the ball. The debutant pacer got to bowl 6 overs in which he leaked 54 runs while the leg-spinner also was expensive, conceding 69 runs for 1 wicket in 9 overs.

Axar Patel’s late magic with the bat helped India take an unassailable 2-0 series lead with the third and final dead rubber to be played on Wednesday. In his entertaining, jailbreak, match-winning knock, Axar walloped 3 fours and 5 sixes, mostly while in the company of tailenders.

It is also not to forget that Axar is playing his first ODI series after 2017, and got the chance in the eleven perhaps only because Ravindra Jadeja is injured.

Bagging the Player of the Match award, the 28-year-old Baroda all-rounder noted this knock as a “special” innings because of the situation it came at. He credited his experience at the IPL.

“I think this is a special one. It came at a crucial time and also helped the team to win the series. We have done the same in the IPL. We just needed to remain calm and keep the intensity up. I was playing an ODI after close to 5 years. I would want to continue performing like this for my team,” Axar said at the post-match press conference.

Quiz! Name The Men's ODI Bowlers With The Best Strike Rate This Century