Has ‘Morganball’ gone too far? Not for the first time in ODI cricket this summer, England’s batters seem muddled and ineffective when attempting to compile a total. Despite the second ODI against South Africa being a shortened 29 over game, where clarity over role should be clearer, the batting at times seemed reckless and poorly tempoed. England were yet again bowled out, for the fifth consecutive ODI in a row, a doubly impressive feat considering the truncated nature of today’s encounter. Although revolutionary at conception, has the all out attack mentality of ‘Morganball’ in 50 over cricket gone too far?

In their completed five home ODI’s this summer, England have shown noticeably more attacking intent than in any summer since the ODI revolution, which was galvanised by their early 50 over World Cup exit the winter previously. This year, they have attacked just under 60% of their balls faced, 8% more than the next highest yearly figure (2015). 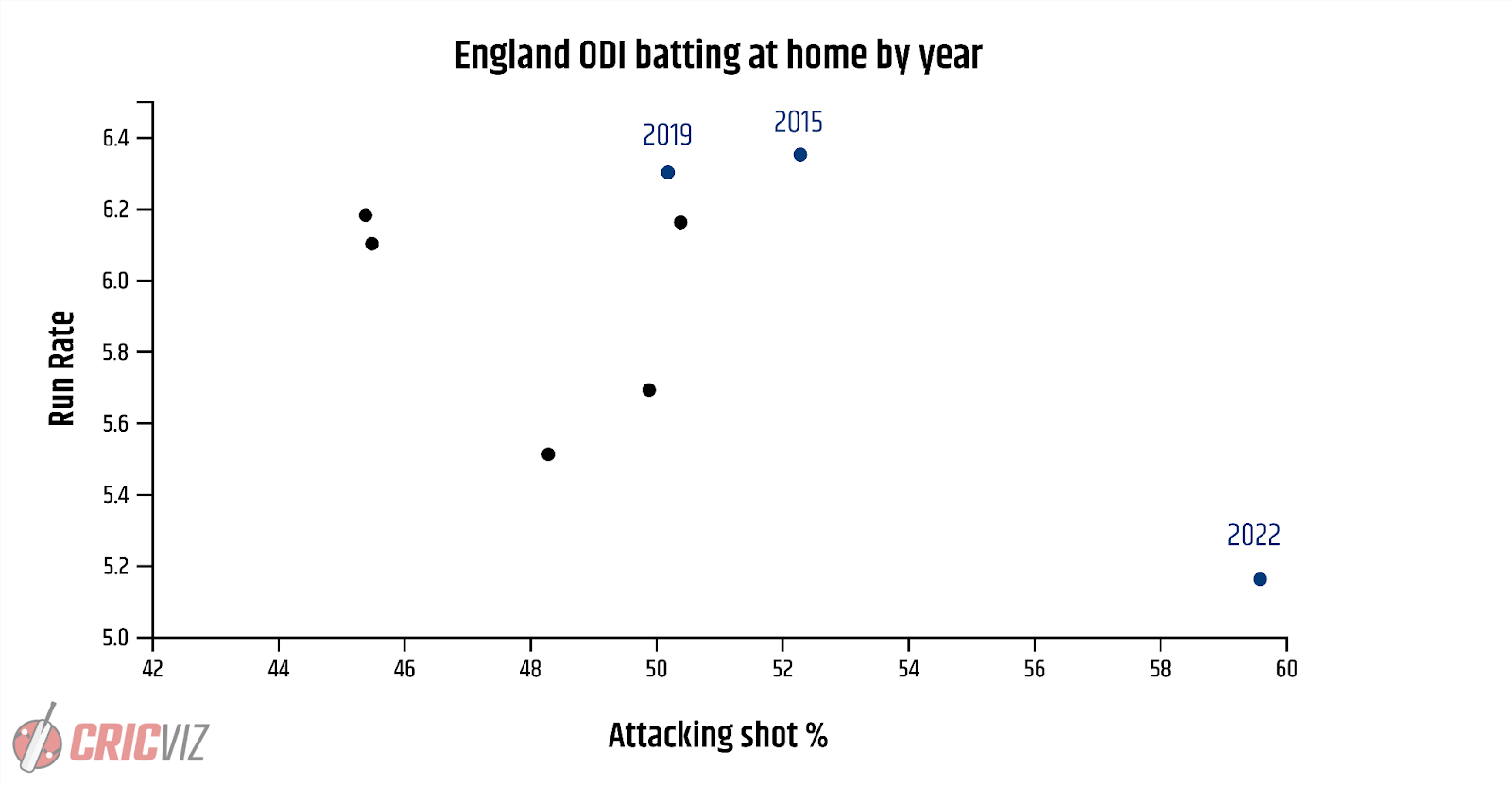 You would expect there to be a clear correlation between a higher proportion of attacking shots and a higher run-rate, and that can be seen in previous home summers for England. Their highest team scoring rate came in 2015, when there had also been the then highest amount of attacking intent shown. But despite the attacking shot percentage this summer being a clear outlier compared to previous, their run-rate as a team has been far, far lower than any year since the white ball reset of 2015.

It comes down simply to execution. England’s execution has been poor. Whether this has been down to shot selection or just execution of skills, it’s harder to tell, but when England have attacked this year, it has not gone to plan.

As is clearly displayed in the above table, England’s top six have lost a wicket far more frequently, for less runs, all whilst hitting fewer boundaries, every time they have attacked the deliveries this year. As a result England have struggled, and the discourse around the state of the game has turned sour.

There has been vast discussion over recent weeks about the increasing monopolisation of power in T20 franchise leagues, and the consequential marginalisation of the 50 over game. Naturally, the world’s best limited overs players are playing fewer and fewer 50 over matches, with T20 (and shorter form) cricket becoming the primary source of their white ball diets. Their bodies and brains are being conditioned in T20 mode, and the ‘art’ of 50 over batting is being lost.

Since 2015, sides who win ODI matches in England play just 47% attacking shots. They rotate the strike 37% of the time, defend for 12% and leave 4% of balls alone. England this summer have been miles away from that winning formula, attacking more, rotating the strike less and defending good balls less frequently.

None of England’s current ODI squad played any matches in last year’s Royal London one-day cup. They were all either featuring in the Test series against India that was running concurrently, or were playing in the Hundred.

The Hundred, by its nature, is a competition with even more emphasis on attacking intent, and less on the traditional blend of the batting skills which have been successful in 50 over cricket.

How can playing in this competition be a good training ground for our 50 over team? What we have seen this summer is a natural consequence of the shifting emphasis of the white ball game to shorter, more compact formats. Rightly or wrongly, this is the way England are going to be playing their 50 over cricket from now on. They are becoming, as to be expected, products of their collective environment.

And yes, England got over the line on friday night, thanks to some exceptional new ball bowling, and a tight fielding display. But the concern over the direction of their 50 over batting, is a valid one, and will need to be looked at ahead of the World Cup defence in India next Autumn. Perhaps a return to the tempo of 50 over batting that gave them so much success is in order for history to repeat itself?

Rufus Bullough is an analyst for CricViz