Shreyas Iyer Silenced The Crowd: For the second game on a trot, Shikhar Dhawan’s second-string Indian team won a last-over cliffhanger against the West Indies, and with Sunday’s victory, the Men In Blue took an unassailable 2-0 series lead with only one ODI to go.

Victory in the first ODI by only 3 runs, which came on the last ball of the game, was followed by a tight finish in the second ODI, with the visitors emerging triumphant by 2 wickets with only 2 balls to spare in a run-chase of 312.

Six runs were needed from the last three balls when Axar Patel launched Kyle Mayers down the ground to complete a memorable chase. Patel, who finished the game with an all-rounder brilliance of 9-1-40-1 with the ball and 64* off 35 balls, was adjudged the Player of the Match.

Shreyas Iyer silences the ground with finger on lip gesture

The animosity between the Trinidad crowd and India player Shreyas Iyer seems to be quite a rivalry in the two ODIs so far.

In the first match, Iyer was seen dancing to mock the crowd after taking Shamarh Brooks’ catch. He had later revealed that the crowd had been taunting him to drop a catch and he thought he would shut them up with a dance of their style. 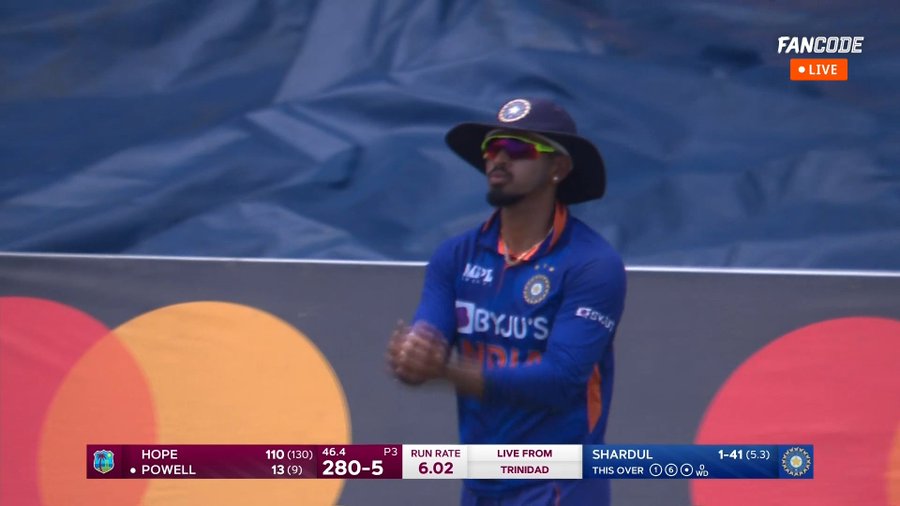 Then, on Sunday in the second ODI, Iyer came up with another gesture – finger-on-lip – to silence the crowd after taking a terrific catch of Rovman Powell. Powell had fiercely drilled a Shardul Thakur delivery down the ground and the ball would have sailed for a maximum but for Shreyas Iyer’s intervention as he caught the ball superbly and then went on the ground, leaving even Powell stunned.

After getting up, Iyer shushed the crowd and calmly with his own swagger walked to his teammates to celebrate.

In the first ODI, after taking Brooks’ catch, Iyer danced around rhythmically to tease the West Indies crowd.

“Wo log chidha rahe the drop a catch, drop a catch (they were teasing me saying ‘drop a catch’ ‘drop a catch’) so catch aye mere paas maine unke jaisa dance kia thodda (when a catch came my way, I tried to dance like them after taking the catch),” Iyer had said when asked by teammate Mohammed Siraj in the video for the BCCI.

With the bat as well, Iyer has caused plenty of trouble to the West Indies bowlers and their fans. In the first match, the number 3 batsman scored 54 runs off 57 balls and followed it up with another half-century in the second ODI, scoring 63 runs off 71 balls to cement his claim for a place in the Indian team.

Shreyas Iyer admitted that he was disappointed with missing out on a big score after crossing fifty, but remained content to have helped out his side in a winning cause.

“I was really happy to get what score I got today, but really unhappy with the way I was dismissed. I thought I could have taken the team through easily. I was setting up the total, but was very unfortunate with the wicket. Hopefully, I get to score a century in the next game,” Iyer said after the match.