Deepak Hooda Was Spotted Wearing Prasidh Krishna’s Jersey: Having won the first ODI on Friday, then on Sunday, India embarked on their aim to win the ongoing ODI series against the West Indies in the second ODI.

Nicholas Pooran won the toss and elected to bat first and his openers, Shai Hope and Kyle Mayers, made full use of the good batting conditions and some erratic bowling by Indian pacers by plundering 65 runs in the first 9 overs. 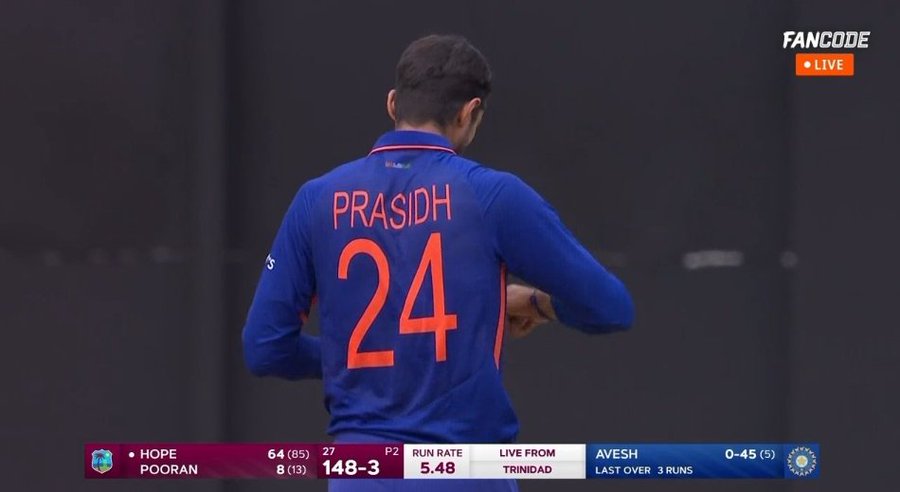 With still one over to go in the batting powerplay, Shikhar Dhawan then made an audacious move – or perhaps he just had to – by introducing part-time off-spinner Deepak Hooda in the attack to target left-handed Mayers.

To Dhawan’s and Hooda’s and India’s delight, the off-spinner struck on his very first ball as Mayers got out as a soft dismissal – chipping back a simple catch to Hooda who gave his side the breakthrough.

As Hooda celebrated fans noticed an odd thing that Hooda was wearing a jersey which had the name of its possessor taped and hidden away. The jersey had the number 24 written on it.

This led the fans to speculate a wild theory: couple of fans recalled and then showed that Hooda’s former team Baroda’s captain Krunal Pandya – with whom he’d had a feud last year but then both played together at Lucknow Super Giants – wore the number 24 when he played for India.

Soon, it was cleared out by some netizens that Hooda was in fact wearing pacer Prasidh Krishna’s jersey. Krishna was dropped for this encounter; fans kept wondering why really was Hooda wearing the seamer’s jersey, which he then taped, and not his own.

Here are some of the funny reactions:

This is not the hooda’s jersey
So what happened with his jersey @md_786firdaush @asadfarooquee @BCCI @ICC pic.twitter.com/Ruo8NdFSPF

Meanwhile, led by Shai Hopes’ terrific century and Nicholas Pooran’s fireworks, West Indies have been successful in posting a total in excess of 300 on Sunday. After the 65-run opening stand with Mayers, Hope was involved in a 62-run second wicket stand with Shamarh Brooks.

India made double strikes with Brooks and Brandon Kings’ wickets before the West Indies skipper Nicholas Pooran tore into the Indian bowlers. Of the 117-run partnership between Hope and Pooran, the left-hander hammered 74 runs off 77 balls. A couple of small but vital and quick partnerships in the end helped the hosts go over 300.