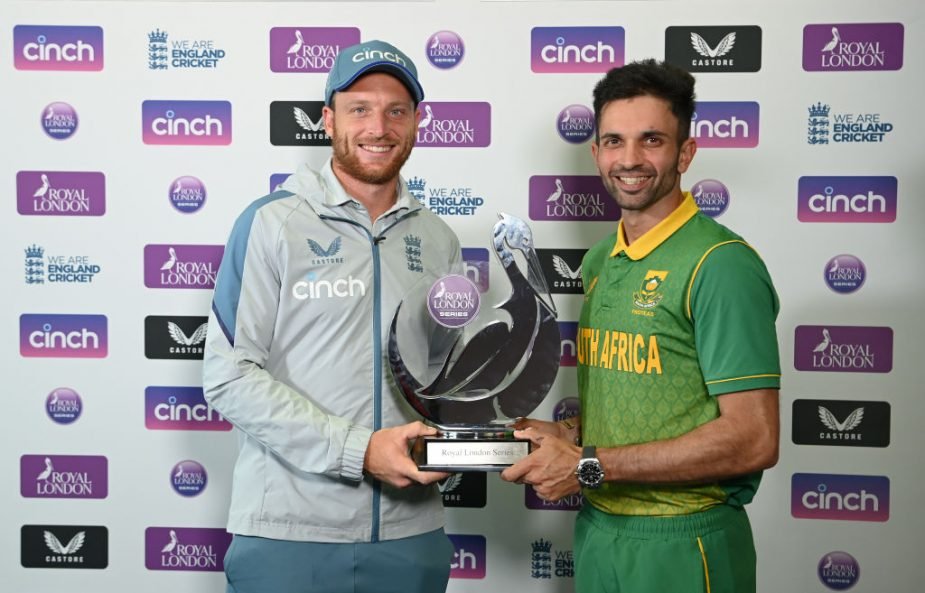 Rain ruined the final ODI between England and South Africa, leaving the scoreline at 1-1 after three matches – here’s our team of the series.

After two quiet matches, rain cruelly denied de Kock the opportunity to hit his 18th ODI hundred in the finale after he raced to 92 off just 76 balls.

Bairstow hasn’t replicated his recent Test exploits against the white ball this summer, but he still managed to raise his bat for a half-century in the series opener.

Van der Dussen starred in South Africa’s 62-run win, hitting a career-best 134 off 117 balls at Chester-le-Street. After 38 ODIs, his batting average sits at an extraordinary 69.31.

Markram played an all-round role in the opening ODI, following up a 66-ball 71 with the key wickets of Bairstow and Ben Stokes in the run chase.

Kept England going with the bat in the first ODI after the middle order collapsed, eventually perishing for 86 off 77 balls as he tried to up the ante in the run chase.

Has consistently made starts this summer for England before failing to reach fifty. Nonetheless, a cameo was enough in the second ODI, as he launched some huge hits off Anrich Nortje to finish with 38 off 26, the highest score in the match. Picked up a couple of wickets in the opener too.

Player of the Match in the second ODI after he contributed with both bat and ball. Came in with England in trouble at 101-6 to deliver an 18-ball 35 before bowling David Miller in the first of two economical overs.

Collected a four-wicket haul in the second ODI, ripping through England’s top order in his first two overs with the dismissals of Phil Salt, Root and Bairstow.

The paceman delivered at the backend of England’s chase in the first ODI, taking the final four wickets to seal victory. In the second ODI, he was at the end of a Livingstone blitz but still had the final say, deceiving the batter with a slower-ball bouncer.

Twice picked up the big wicket of Jos Buttler, holding his own as the England captain tried to take him down.

Struck early twice in the second ODI to set England on their way to a thumping victory. Finished his ODI summer with 13 wickets at an average of 16.38