Alyssa Healy and the Australian women’s cricket team’s golden run continued as they added the Commonwealth Games 2022 Gold Medal to their already illustrious triumphant tally. However, Healy’s antics on social media copped her a lot of flak and trolls from the Indian fans as she seemingly took a dig at them on Twitter. 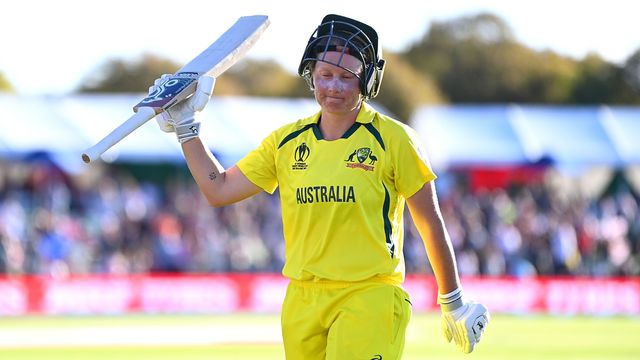 Opener Alyssa Healy has gained a reputation to be their big match player after putting up Player of the Match performances in both the aforementioned finals. Australia further came out trumps against India in the CWG Final at Edgbaston on Sunday in a close 9-run victory.

Healy, though, this time managed only 7 runs, but took a great diving catch of India skipper Harmanpreet Kaur, who scored 65 off 43 and was threatening to take India home in the run-chase of 162. But, wickets of Kaur and Jemimah Rodrigues triggered a collapse from which India couldn’t recover.

On Tuesday, Healy took to Twitter to upload a picture in which there was a board that read: “SALTY”. She didn’t caption or wrote anything, but it was very much clear that she was responding to the Indian fans who had been commenting under her previous posts; also many of the Indian fans had raised the question regarding Australian all-rounder Tahila McGrath playing in the final despite testing positive for covid-19 ahead of the start of play.

Indian fand were utterly displeased and angry about Healy’s latest Twitter post. And the Aussie wicket-keeper was trolled heavily on the social platform.

enjoy this while you’re here pic.twitter.com/sJ93Htmk7D

Couldn’t contribute anything with the bat, oh wait let me try to be relevant by trying to troll my opposition.

I wonder how much salt has Healey stored in their house.
Starc toh hai hi salty har chiz mein, ye bhi usko tough fight de rahi. It runs in their blood
Use it while cooking food & not social media.

That’s a perfect description of you Alyssa. Put this pic as DP.

Watching Harry from behind the stump like this can’t make anyone comfortable. I know your pain. Get well soon recovery @ahealy77 . This too shall pass https://t.co/bWpFVp1RMw pic.twitter.com/1YL0oOq2VA

Why are Indian fans going crazy?

You chocked when it matters, again!

'The Future Is Here' - Trent Boult Released From Central Contract, Will Continue To Play Domestic Leagues