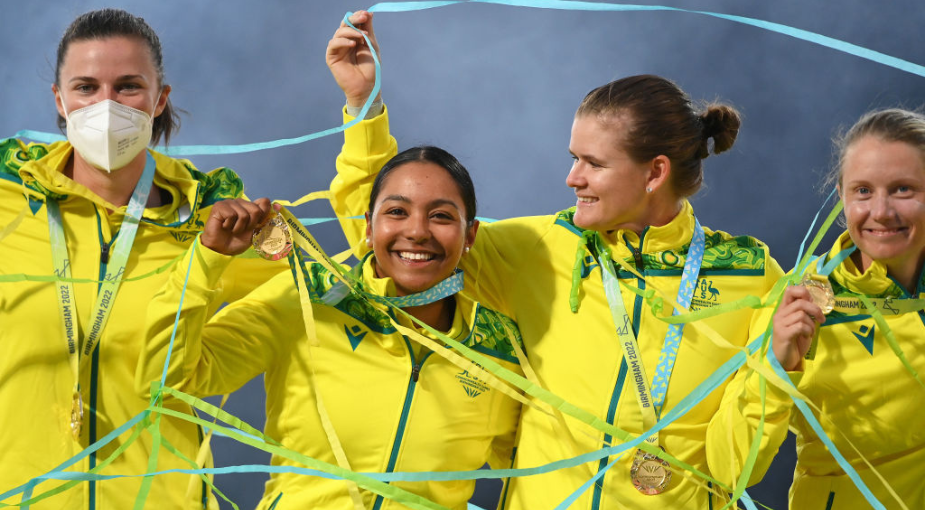 Alyssa Healy has posted a cryptic tweet, which – if one goes by the response – was directed at the ones who criticised the inclusion of COVID-19 positive Tahlia McGrath in the XI of the 2022 Commonwealth Games final against India.

Healy’s tweet, an image with the words “salty” came a day after the Australian women’s cricket team won the gold medal at the Games, defeating India by nine runs in the final. The summit clash was embroiled in controversy even before it began, with Australian all-rounder McGrath testing positive for the virus before the match began.

Healy later clarified that her earlier tweet was only to highlight how clever it was to name a boat in the water “Salty”.

. Relax everyone. It’s a photo of a boat in the water with the name Salty. I thought it was clever. Stop trying to read anything other into it. But if it makes you feel better to reply cruelly go nuts. Water off a ducks back! https://t.co/ZUhES3bS78

Unlike recent protocols, where a cricketer has to self-isolate upon testing positive, McGrath was allowed to take the field, in accordance with the CWG laws. In the recently completed Games, in Birmingham, a positive COVID-19 test did not disqualify athletes from participating, given the United Kingdom’s relaxed guidelines for isolation. After testing positive, athletes were assessed on case-by-case basis to determine if they could play. Factors like the impact of illness, infection levels and the playing arena were monitored.

McGrath, who had mild symptoms, was allowed to be selected in the XI after consultations. “CGA clinical staff have consulted with the Commonwealth Games Federation RACEG (Results Analysis Clinical Expert Group) team and match officials, and McGrath is taking part in today’s final. In consultation with the CGF and the ICC, CGA and Cricket Australia medical staff have implemented a range of comprehensive protocols which will be observed throughout the game and for post-match activity, to minimise the risk of transmission to all players and officials,” read a statement from Commonwealth Games Australia.

McGrath skipped the national anthem at the start of the game. She wore a mask while seated away from her teammates in the first innings, during the course of which she scored two runs. However, she did not wear a mask while batting or fielding, conceded 24 runs in two overs, and was a part of the post-match celebrations, even taking the podium with the rest of the side when the medals were handed out.

The decision to field McGrath had been heavily criticised on social media.

Tahila McGrath represents a country that ensured Novak Djokovic was deported and not allowed to play in Aus Open for being unvaccinated and was called a threat. When it came to one of their own – it was okay to let her play with covid?

Tahila McGrath being allowed to play while being tested positive for COVID-19 is just all kinds of absurd. Apparently that was the reason for toss delay.

Really don’t know how this was allowed, and I hope the Indian team were consulted before that decision was taken.

After the game, India captain Harmanpreet Kaur said that the decision to allow McGrath to play was not done after consultation with the side, but they “had to show sportsman spirit.”

“That was something not in our control. The CWG had to take a decision and we were okay with it since she (McGrath) wasn’t very ill, so we decided to play. We had to show sportsman spirit. I’m happy we didn’t say no to Tahlia, it (missing the final) would’ve been very hard-hitting for her.”

Australia’s Beth Mooney was pleased that the right decision was made with regards to allowing McGrath to play. “It’s no different if someone is playing and they’ve got a cold or flu,” she said.

“I think it was handled extremely well from Australia’s point of view. Having protocols in place and making sure everyone on the team was comfortable she was playing, they did all the right things,” she said. “Obviously towards the toss, it became a bit hairy there for a while but I think it’s no different if someone is playing and they’ve got a cold or flu. From my perspective, the right decision was made and we just went out and played it. It wasn’t something under our control the people who are paid to make those decisions made them.”

Before Healy’s cryptic dig, Anna Lanning, a fellow Australian cricketer, defended McGrath and questioned whether her presence caused the Indian side to lose their last eight wickets for 34 runs. Anna’s sister Meg Lanning led Australia in the tournament.

“She made 2 runs and got smacked for 24 off 2 overs, so if anything she was almost advantageous to India? Or did the shear thought of her having Covid make them lose 8-34 (sic),” with a number of question marks.

She made 2 runs and got smacked for 24 off 2 overs, so if anything she was almost advantageous to India? Or did the shear thought of her having Covid make them lose 8-34???????? 🤔🤔 https://t.co/hyW2OgKiVS

This is not the first time that Healy has attacked the Indian cricket team or their supporters. On their tour of Australia in 2020/21, India Men had raised complaints about the strict quarantine guidelines in their hotel in Brisbane ahead of the fourth Test. Healy tweeted, “the Aus and NZ women’s teams did their quarantine in the same hotel last year. Here’s a shock – we survived…”

– the Aus and NZ women’s teams did their quarantine in the same hotel last year. Here’s a shock – we survived…. https://t.co/9YUTvZ8RqR

Asia Cup 2022: India’s Best XI For The Match Against Pakistan