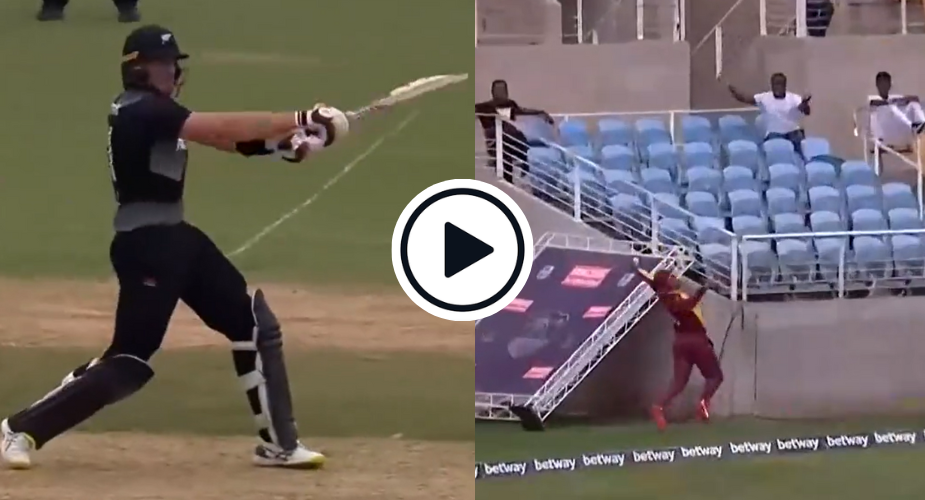 Watch: Shimron Hetmyer produced a sensational fielding effort on the boundary to dismiss Martin Guptill during the 1st T20I between the West Indies and New Zealand.

New Zealand had rattled along to 58-0 in seven overs. Martin Guptill had just begun hitting his straps when Odean Smith came on to bowl. Guptill slashed the first ball over short third for four, and tried an encore off the third ball. Unfortunately, he hit the ball squarer than he intended to, roughly towards Hetmyer at deep point. Hetmyer covered plenty of ground before flinging out his left palm and holding onto a stunning catch. He then showed awareness to tiptoe along the fence, ensuring he did not step on the boundary cushions.

West Indies got Devon Conway next ball, but Kane Williamson’s breezy 47 helped New Zealand posted 185. The West Indies, despite a late charge, were unable to overhaul the total. They eventually crumbled to a 13-run defeat. The second T20I between the two sides is slated to take place on Friday in Jamaica.

What a catch from @SHetmyer! A display of brilliant athleticism to get @Martyguptill‘s wicket.

Watch all the action from the New Zealand tour of West Indies LIVE, only on #FanCode https://t.co/[email protected] @BLACKCAPS#WIvNZ pic.twitter.com/oAmqHi8sy0