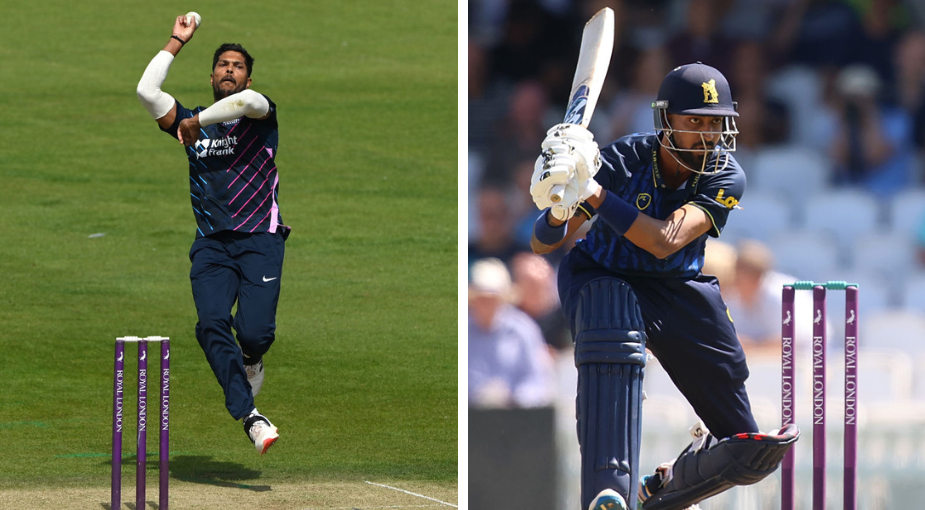 Here is a look at how the five India players have fared in the 2022 Royal London One Day so far.

Cheteshwar Pujara, Umesh Yadav, Navdeep Saini and Washington Sundar, who already took part in the 2022 County Championship, have continued with their teams in the 50-over competition as well. Krunal Pandya, who inked a deal with Warwickshire, have joined them for the One Day Cup.

Playing his first List A game since 2018, Pujara did not get off to the best of starts in the opener, scoring nine runs against Nottinghamshire. However, he scored a 71-ball 63 in the next game, helping Sussex beat Gloucestershire. An unbeaten 14 against Leicestershire followed, but the highlight was a 79-ball 107 against Warwickshire on Friday, including a 22-run over. He was the last batter to be dismissed in a chase of 311, as Sussex lost by four runs. His first List A hundred in over four years took his average to 54.56, the fourth-best among batters with a minimum of 100 games.

With four wickets in six innings, Umesh did not have the greatest run in the County Championship. However, he has managed to strike form in the One Day Cup, with 13 wickets in four matches so far. He started off expensively against Leicestershire, picking up 1-60, but was at his lethal best against Durham, when he ended with figures of 5-33. Four of his wickets were either bowled or leg-before, an indication of how precise and accurate he was throughout the game.

Opening bowling, Umesh again caused the first damage against Surrey, taking out the opener Ben Geddes en route to a three-wicket haul. He then picked up four wickets against Notts. Umesh has the most wickets in the competition thus far, at an average of 15.30. No other bowler with at least eight scalps has a better average.

Pandya last played for India last year, but has shown he can be a strong contender to be the spin all-rounder in the squad after performances in both departments in the One Day Cup. He picked up 2-54 on his county debut, as Gloucestershire all out for 264. The second game, an enthralling tie against Surrey, had Krunal contributing with the bat: walking in at 89-3, he player steadied the ship with a knock of 74, adding 160 with Michael Burgess, helping Warwickshire post 293-5, and then picking up a wicket. Against Pujara’s Sussex, he had 3-51 in a close encounter.

Saini had picked up 11 wickets in two County Championship matches but has been unable to continue the rhythm in the One Day Cup. He has been expensive in all three games, conceding 61, 71 and 68 runs (in 8.1 overs). Though he has managed to take up four wickets, the team would have wanted more accuracy from Saini, who has been given the responsibility of bowling with the new ball.

Young Sundar suffered a shoulder injury on Wednesday against Worcestershire and did not take further part in the match. It was a big disappointment to a player who made a comeback in the County Championship after a hand injury ruled him out of the IPL and subsequent international series against South Africa and Ireland.

Sundar, who had taken eight wickets in two County games and contributed with the bat as well, was effective in the two 50-over games where he had a role to play. Against Yorkshire, he took 1-35 in 10 overs, and scored an unbeaten 30 to take Lancashire home. In the next game, he took 2-43 against Derbyshire, his spell playing a huge role in his side’s win after they had posted only 221-4.