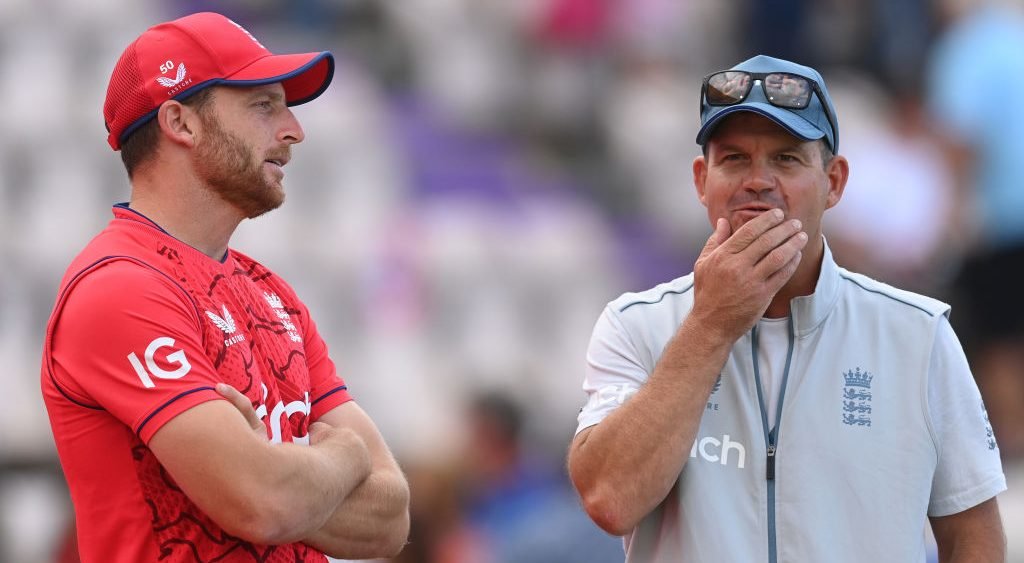 England’s second attempt to become the first men’s side to simultaneously hold both major white-ball global trophies is less than two months away.

Their T20 World Cup preparation mainly consists of a condensed seven-match T20I series in Pakistan that takes place across 11 days in late September and early October.

England’s build up to the tournament has been far from ideal. Eoin Morgan brought an abrupt end to his international career earlier this summer and England have lost T20I series to both India and South Africa since Jos Buttler took over the captaincy.

The eventual make-up of the squad is hard to predict with several England limited-overs regulars facing races to be fit in time for the tournament. With that in mind, here are the major selection questions facing England ahead of this year’s T20 World Cup.

Do they stick with Jason Roy?

Jason Roy is undoubtedly an England white-ball great. He was pivotal in reinvigorating England’s stumbling 2019 World Cup campaign; his ODI record, where he averages over 40 with a strike rate of 107 is absurdly good. But the credit left in his bank, particularly in T20I cricket, is quickly evaporating.

The numbers make grim reading. Across six home T20Is this summer, he averaged 12.67 with a strike rate of 77.55. In The Hundred, he is averaging less than 10 at a strike rate of exactly 100. These are returns that are actively detrimental to his sides’ chances of success.

Roy’s predicament is compounded by the potential return of Ben Stokes. The England Test captain is set to miss the Pakistan series, but has been touted as a top-four option by head coach Matthew Mott.

If England choose to move on from Roy, Phil Salt is the assumed first cab off the rank. He has had an excellent summer and has impressed in small doses for England – Salt has not, however, yet opened for England in T20I cricket.

Other options include the two centurions in The Hundred – Will Smeed and Will Jacks – James Vince or maybe even Alex Hales, who is striking at 162.33 in T20 cricket in 2022.

How do England replace Morgan?

While Morgan’s form tailed off towards the backend of his T20I career, he was for so long the fulcrum of England’s middle order. Replacing him is not straightforward. Against South Africa and India this summer, England effectively replaced Morgan with an additional all-rounder with Sam Curran and Moeen Ali both occupying spots in the top seven.

This marked a slight change from how the side was balanced with Morgan in the team; the former England captain generally had a preference for a side with a longer batting line up. If England revert to the batting-heavy Morgan approach, there is a spot to be won in the top seven. Sam Billings batted at No.7 for England in England’s T20 World Cup semi-final defeat to New Zealand last year but hasn’t featured in any England white-ball squads this summer. Harry Brook would be the most likely beneficiary if England opt for a change of tact – he has been one of the standout English batters in domestic cricket over the past few seasons and enjoyed a brief spell in the side against India earlier this summer.

Which seamers are fit?

England are in the midst of an almost unprecedented injury crisis. Jos Buttler and Liam Livingstone are currently both out injured while the list of absent seamers is as extremely long. Jofra Archer, Mark Wood, Olly Stone, Saqib Mahmood, Chris Woakes and Brydon Carse are all currently in the midst of lengthy lay-offs, while the likes of Chris Jordan, Richard Gleeson and Tymal Mills have missed sections of The Hundred as well. Reece Topley, meanwhile, opted to miss the final stages of the tournament to preserve his body ahead of what could be a busy winter.

So, who is fit? It is likely some of the above will be back in time for the Pakistan tour and the T20 World Cup to follow. David Willey played in three of England’s T20Is in the summer while fellow left-arm quick Sam Curran was nearly an ever-present. The injury crisis could leave room for call-ups for Luke Wood and Tom Helm, both of whom have enjoyed decent Hundred campaigns.

Who is Rashid’s back-up?

A longstanding, mostly unanswered question for England in white-ball cricket. Matt Parkinson played a couple of games in Rashid’s absence earlier in the summer but it seems like England have moved past Parkinson, in white-ball cricket at least, for the time being; Parkinson was omitted from England’s T20I squad against South Africa in July.

In truth, there hasn’t been a standout English wrist-spinner in The Hundred this summer. Mason Crane has taken 10 wickets but has been expensive. Jake Lintott was one of the leading spinners in the tournament in 2021 but has endured a more difficult second season for a Southern Brave side that has struggled to repeat its title-winning form from last year while Rehan Ahmed, 18, has caught the eye but remains wicketless in the tournament after four appearances. Parkinson has probably the been the tournament’s most consistent English wrist-spinner

The safest option for England would be to turn to the ever-dependable Liam Dawson, a 2019 World Cup winner with just 14 appearances for England across over six years as an international cricketer. Though a finger spinner, his stock ball turns the same way as Rashid’s and he also maintains, and maybe even adds, to England’s batting depth. Dawson is also enjoying a fantastic Hundred campaign during which his economy rate has been 7.10.

'If We Compare With Afghanistan, Bangladesh Is An Easier Opponent' – Sri Lanka Captain Prompts War Of Words Before Crunch Asia Cup Clash