From Feeding Dogs To Putting On Trousers: 17 Tales Of Bizarre Injuries And Ailments In Cricket 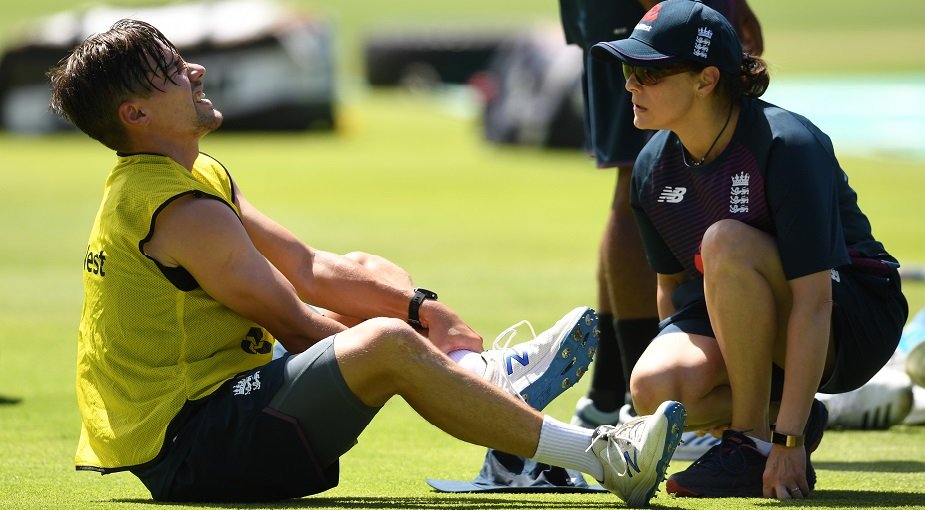 Jonny Bairstow recently suffered an injury due to a “freak accident whilst playing golf” that has ruled him out of the upcoming ICC T20 World Cup.

The list is not comprehensive, and does not include the really gory incidents – of Fred Morley’s fatal rib injury in Colombo, KS Ranjitsinhji being accidentally shot in the eye, Fred Titmus’ chopped toes, Trevor Franklin’s trolley accident in Gatwick, and others.

In 1921, Yorkshire wicketkeeper Arthur Dolphin was sitting on a chair in the Lord’s dressing room. He tried to reach out for his clothes and somehow fell. The resultant broken wrist ruled him out of the rest of the summer. As you do.

Former India Test cricketer Amir Elahi was playing against India in Delhi during Pakistan’s first ever Test series, in 1952/53. Elahi, playing his first Test in five years and aged 44, seemingly wanted to recapture his youth and decided to dye his hair black to cover the streaks of grey. Unfortunately, the chemicals led to inflammation of his eyes, and he was restricted to just six overs in India’s 144-over innings.

Earlier on that tour, Nazar Mohammad faced the first ball and scored the first hundred for Pakistan in Test cricket. He had been in a relationship with the legendary actor and singer Noor Jehan. The duo was in a hotel room when Noor Jehan’s husband Shaukat Hussain Rizvi walked in with a gun. Nazar jumped off the window, which resulted in multiple fractures of his arm. The season in which he made his Test debut turned out to be his last in first-class cricket.

Being hit by a car is not unusual – unless it is one’s own car, that too after it ran out of fuel. At Brentford in 1965, Ted Dexter tried to push his emptied-out Jaguar to a garage when he lost control. The car pinned him against a factory gate, breaking his right leg.

A tale of two brothers

One weird injury might count as misfortune, but two or more, as happened to the Greigs?

The six-foot-seven Tony Greig was once put up in a hotel where the mirror was placed too low for him. He injured his neck trying to see himself. Younger brother Ian fared worse. In June 1983, he returned home after a day’s cricket for Sussex, but his key gave way inside the lock of his residence. He tried to climb through a window, fell 18 feet, and broke an ankle. In 1987, he somehow managed to bang his head on an X-ray machine and end up with two stitches.

Derek Pringle was not quite writing letters – as per rumours – ahead of the Leeds Test match of 1982, though putting complimentary tickets inside envelopes was just as innocuous. He leaned back, the chair collapsed, and Pringle suffered spasms between his shoulder blades.

Chris Old’s nickname, Chilly, comes from his scoreboard entry of C Old. It is not clear whether the sneeze in question was a result of a chill he caught, but it cracked a rib and resulted in him missing a Test match.

England were swept 0-5 on the 1985/86 tour of the West Indies, but for wicketkeeper Bruce French, that was not where it ended. He was bitten by a stray dog on the tour.

Two decades later, Matthew Hayden went out for a jog near his home when he faced a “vicious attack” by a dog. Hayden returned in time for the Test series where, in a curious coincidence, England lost 0-5 again.

Had there been an award for bizarre cricketing injuries, French would have been a contender. On England’s Pakistan tour of 1987/88, he managed to get injured on the head when a spectator threw a cricket ball, and had to be taken to the hospital to be stitched up. A car hit him before he entered the hospital, and once everything was done, he got up – and hit a light fitting.

Glenn McGrath had set the tone of the 2005 Ashes by predicting an Australian whitewash and taking nine wickets in the first Test, at Lord’s. The Australians were playing rugby on the morning of the second Test, at Edgbaston, when McGrath accidentally stepped on a stray cricket ball and sustained a grade two tear in the lateral ligament of his right ankle. He missed the Test, England levelled the series, and went on to regain the Ashes for the first time in 18 years.

In Cape Town in 2020/21, the England squad was playing football when Rory Burns scored a goal – and landed on his left ankle, sustaining ligament damage. He missed four months of cricket, with the England management soon banning the sport from their pre-match warm-ups.

On their doomed 1998/99 tour of South Africa (they lost 0-5), West Indies lost several cricketers to injuries. However, the most bizarre of them happened to Jimmy Adams, their captain, when he was inside an aircraft en route to South Africa. Adams tried to cut open a bread roll with a plastic spoon and somehow sliced at least one tendon of the little finger of his left hand. He missed the entire Test series.

Perhaps the most bizarre injury on the list – and that is saying something. Just before a T20I against New Zealand in Perth in 2007/08, Brad Hodge tried to put on his trousers – and injured himself enough to be ruled out of the match. The drama did not end there: there was no reserve batter in the squad, and Luke Pomersbach, who had come to watch the match as a spectator, played his only international game.

After being dismissed first ball by Mujeeb Ur Rahman of Hampshire in a T20 Blast match of 2018, Jason Roy of Surrey threw his bat in frustration. Much to his horror, the bat bounced back and hit him on the face. He missed the next match, against Glamorgan, which Surrey lost and were duly knocked out.

During the 2019/20 Women’s Big Bash League, Dane van Niekerk “tried to stab an avocado” and ended up with five stitches in her hand. Sydney Sixers teammate Ellyse Perry gifted her an avocado shirt, avocado trousers, and – thankfully – peelers. Van Niekerk’s sense of humour lived on after the incident.

A second entry for van Niekerk, who would provide stiff competition to French. She was on the wooden deck outside her house in Gqberha when she realised she had to feed the dogs. Unfortunately, it was raining, and her feet gave way as she tried to climb down the edge of the deck. The fractured left ankle was enough to rule the South African captain out of the 2022 World Cup. Even worse, there was another way down from the decking: “Sometimes I’m a loose cannon and I don’t think,” she told the Guardian.” At that moment there were stairs just next to me but I wanted to climb down. When it rains do you do that?”

When England toured India in 2020/21, Zak Crawley slipped on the marble floor of the dressing-room in Chepauk, Chennai, injured his wrist, and missed two Test matches. Later that year, Ben Foakes slipped in his socks in The Oval dressing-room, tore his hamstring, and missed every Test match of the summer.

In the same year, Jofra Archer – already battling an elbow injury – accidentally dropped his aquarium while trying to clean it in the bath. He needed surgery to remove the piece of glass that got lodged in his right hand.

A string of ailments meant that only four of the 16 members of the England squad were available for every match on the 1994/95 Ashes tour. However, things took a surreal turn when even David Roberts, the team physiotherapist, broke a finger in fielding practice.