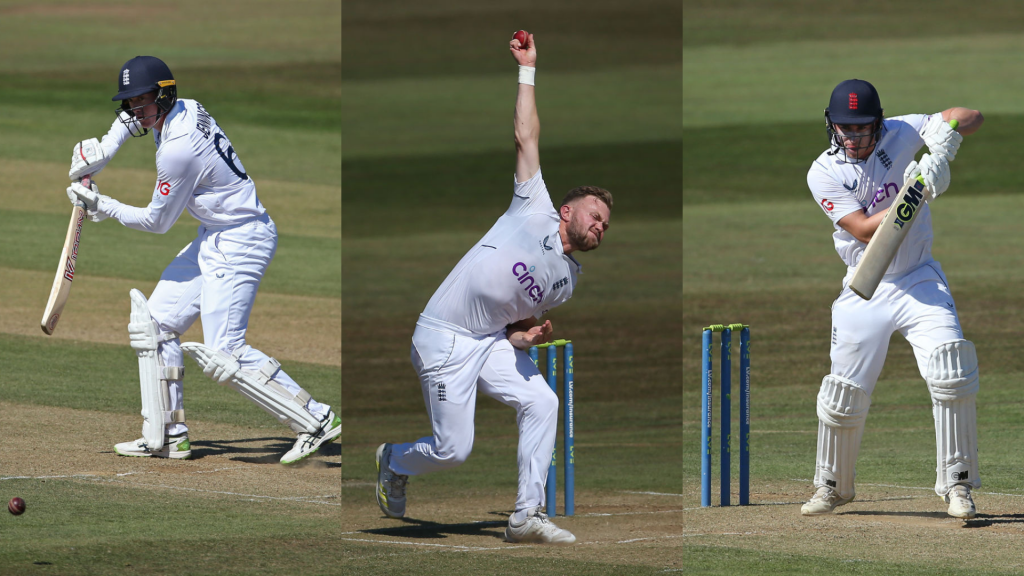 With The Hundred wrapped up, the County Championship is back for the last few weeks of the season.

England are currently in action against South Africa so we’ve decided to have a look at how players on the fringes of international cricket performed this week. That includes players who have played Test cricket in the last couple of years, those who have been part of the Lions set-up recently and a couple of select others too.

Just days on from a Player-of-the-Match performance in the final of the men’s Hundred, Cook celebrated with match figures of 10-60 in a thumping innings win for Essex over Kent. The right-arm seamer – who has played both red- and white-ball cricket for the Lions this summer – holds an astonishing first-class record, with his 198 first-class wickets having come at an average of 19.70.

Lawrence missed out on a big score as Essex piled on 573 in their only innings. He fell victim to an outswinging yorker from part-timer Daniel Bell-Drummond.

Billings had to contend with a groin injury sustained on the opening day and consequently struggled with the bat, recording a pair.

Cox received his maiden England call-up last week when he was named in the T20I squad to tour Pakistan, but he’s also had a fine red-ball season, too, averaging just under 46 in the County Championship. He battled for Kent as they fell to defeat, top-scoring with 65 as they were bowled out for 149.

Opener Jennings continued his excellent season for Lancashire, reaching the milestone of 1,000 County Championship in just his ninth match this season. His record in Roses clashes of late is astonishing; the 236-ball 119 was his fourth consecutive red-ball hundred against Yorkshire.

Bohannon, who played for the Lions in Australia last winter, had a quiet match in comparison to the other members of Lancashire’s top order. Nonetheless, he’s still averaging just short of 47 in the Championship this summer.

Unfurled a magical delivery to bowl George Hill in Yorkshire’s first innings, getting the ball to rip past the right-hander’s forward defence and rattle the stumps.

Bess went at more than six an over as Lancashire searched for quick runs to force a declaration in their second innings.

Bracey’s difficult summer with the bat in red-ball cricket continues. After two centuries in his first two matches, the keeper-batter has since passed fifty just twice in the County Championship.

All-rounder Dawson has had a solid Championship campaign for title-chasers Hampshire, averaging 34.52 with the bat and less than 30 with the ball. His impact was greater with the bat in this match; he put on a 63-run stand with Aneurin Donald as Hampshire went from 167-5 to a declared total of 400-9.

Hameed’s half-century helped Notts to a comprehensive 241-run-win over Leicestershire. The opener has had fine season since losing his England place during last winter’s Ashes; 20 innings in Division Two have seen him reach fifty on nine occasions.

Spin-bowling all-rounder Patterson-White – who played in the Lions’ win over South Africa last month – was only required for five deliveries in Leicestershire’s first innings, bowling Michael Finan to end Leicestershire’s innings on 93.