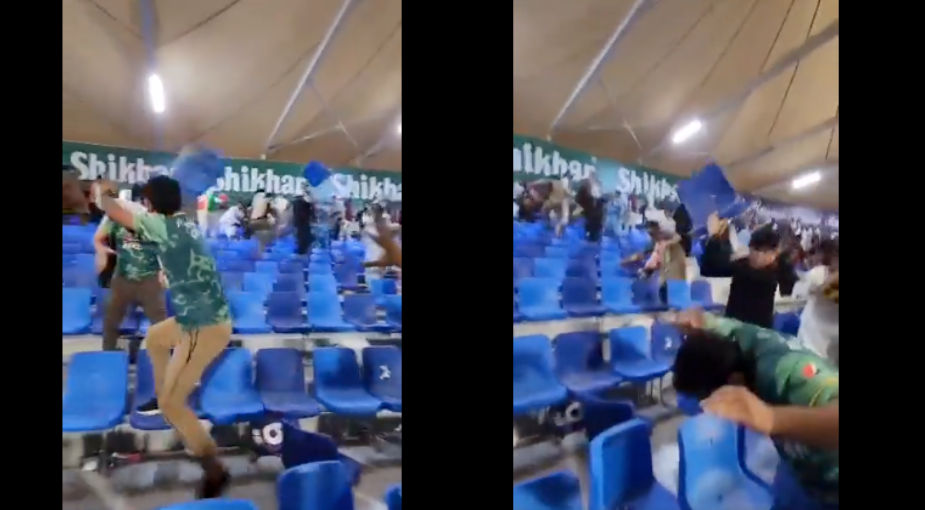 Following a highly charged Afghanistan-Pakistan Asia Cup game that saw sparks fly on the ground, disruptive fans were involved in an ugly fracas at the Sharjah International Stadium.

The nail-biting finish saw Pakistan No.10 Naseem Shah hit consecutive sixes to take his side home in the last over. It also had its share of on-field drama, with Asif Ali and Fareed Ahmed being involved in a scuffle.

Subsequent videos captured from the crowd saw fans taking on each other in the stands, yanking out bucket seats at the venue and chucking them at each other. Fans were even seen hitting other fans on the head with seats.

The visuals prompted plenty of reactions on social media. Shoaib Akhtar tweeted a video that showed fans wearing Pakistan kits being targeted: “This is what Afghan fans are doing.” He tagged Shafiq Stanikzai, former Afghanistan cricket chief, in the tweet, saying “your crowd and your players both need to learn.”

This is what Afghan fans are doing.
This is what they’ve done in the past multiple times.This is a game and its supposed to be played and taken in the right [email protected] your crowd & your players both need to learn a few things if you guys want to grow in the sport. pic.twitter.com/rg57D0c7t8

In an indirect response to another tweet – restricted to only certain audience – Stanikzai seemingly defended the wrath of the spectators: “You can’t control the emotions of the crowd and such incidents happened in the world of cricket multiple, you should go ask Kabir Khan, Inzimam [sic] Bhai and @iRashidLatif68 how we treated them.”

You can’t control the emotions of the crowd and such incidents happened in the world of cricket multiple, you should go ask Kabir Khan, Inzimam Bhai and @iRashidLatif68 how we treated them. Am giving you an advice next time baat ko nation pe Mat lena https://t.co/JQTgzWBNqL

He concluded the tweet with what translates to: “An advice for you, next time, do not bring the nations into the discussion.”

It’s not the first time Afghanistan and Pakistan supporters have clashed at a cricket stadium. The 2019 World Cup fixture is a recent infamous episode, when fans scaled the walls of Headingley’s Western Terrace, hurling objects at each other, leading to mass ejections from the venue. Last year’s T20 World Cup fixture between the two sides also witnessed crowd trouble after thousands of ticketless fans tried to force their way into the Dubai International Stadium.