‘Be Honoured To Play In Her Memory’: Cricket World Mourns Death Of Queen Elizabeth II 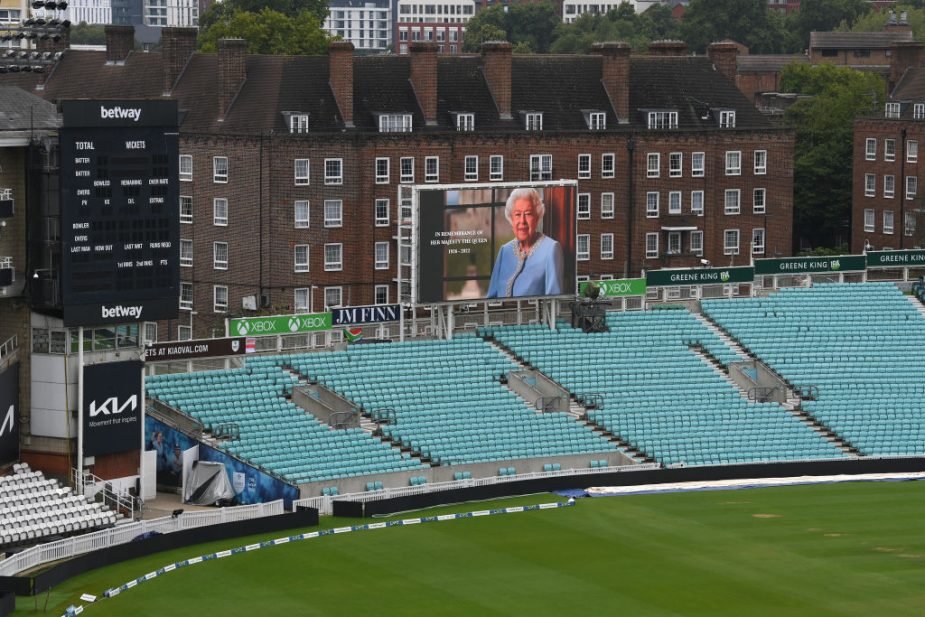 Figures and organisations from the world of cricket have paid their respects after the death of Queen Elizabeth II.

The Queen, the longest reigning British monarch, passed away on September 8.

A statement from the ECB read: “The England and Wales Cricket Board is deeply saddened at the death of Her Majesty Queen Elizabeth II. The Queen and her late husband H.R.H. Prince Philip, The Duke of Edinburgh, both had a long history of supporting cricket and England’s national sides.”

ECB chair Richard Thompson added: “I’m sure I speak for everyone in the game when I say how truly sad I am to hear of the Queen’s passing. Her Majesty has been such a great supporter of the game and was always so vocal of her and her late husband’s enjoyment around the sport. Her dedication to her country will never be forgotten. For her service and her selflessness over her extraordinary reign, we owe her a debt that can never be repaid.”

Following the death of the Queen, no play took place between England and South Africa on Friday of The Oval Test, though the fixture will resume on Saturday. The women’s T20I between England and India at Durham, domestic and recreational cricket will also take place.

The third Test will remain as scheduled, with Saturday to be day three of a five-day Test. No play took place on day one due to rain.

Ahead of the ECB’s announcement that play would take place on Saturday, England Test captain Ben Stokes expressed his wish to continue the match, tweeting: “She loved sport, be honoured to play in her memory.”

She loved sport, be honoured to play in her memory ️ https://t.co/sNSJ3qJreW

Tributes poured in from around the globe:

Saddened to hear about the passing away of Queen Elizabeth II. I had the opportunity to meet her in person on a number of occasions, and the love & respect that people had for her was heartening to see. My deepest condolences to her family and dear ones.

From sunset this evening, until the evening of Her Majesty’s Funeral, we join other landmarks around the city in lighting up purple as a token of Victoria’s respect and gratitude to Queen Elizabeth II.

Cricket South Africa would like to extend its deepest sympathies to the Royal Family, the UK and the Commonwealth at large.

We are saddened by the death of Her Majesty Queen Elizabeth II.

Our thoughts are with the whole Royal Family. pic.twitter.com/gIKx7hw6fj

Had the honor of meeting her during 1999 World Cup.
Her Majesty, Queen Elizabeth II #QueenElizabeth pic.twitter.com/u1v9zieCRL

The Queen and her late husband Prince Philip, The Duke of Edinburgh, had a long history of supporting cricket and Her Majesty was always vocal about her enjoyment of our great game.

Pained to know about demise of Queen Elizabeth II, Britain’s Longest Reigning Monarch. She shall be remembered for her leadership & dignity in public life. My condolences to her family. May her soul rest in peace.