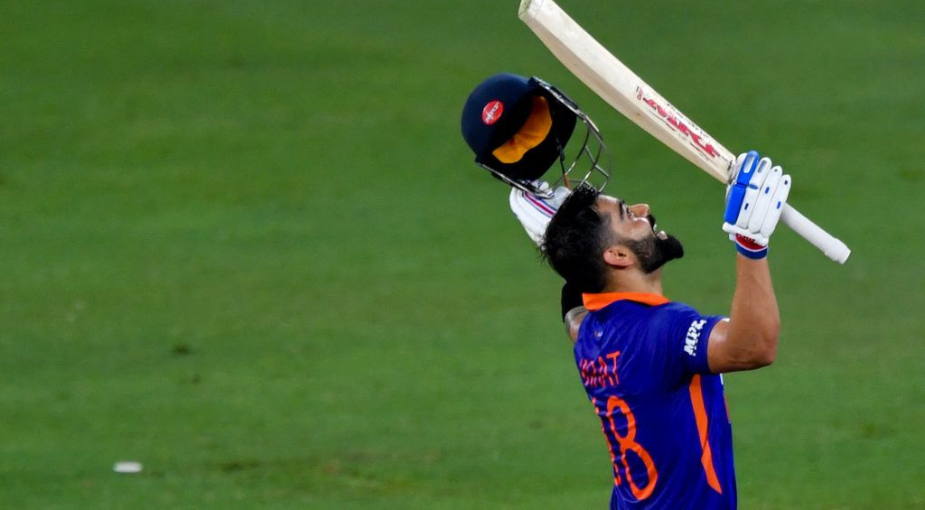 Virat Kohli is up and running again and there is nothing else we would do than watch him in full glory, writes Sarah Waris.

The first ever case of COVID-19 was reported in December 2019, a few weeks after Kohli smashed a brilliant hundred against Bangladesh in a pink-ball Test match at the Eden Gardens – his 70th in international cricket. It was also his 36th ton since 2016 – at the rate of one every four matches.

When centuries become routine, a sense of monotony creeps in. Once greatness gets established, the perennial applause is reduced to a soft ritual. A special knock that wrings out every ounce of energy and sweat does not break the press the way it would have done for lesser mortals. Fans cease to be in awe.

“Oh, a Kohli hundred again. The GOAT.” The same old words. Nothing new. Nothing extraordinary.

Batters anticipate the purple patches in their career, the moment when they have that extra millisecond to get into position and not just thwart an excellent delivery but also pull off astonishing hit. Kohli’s entire career comprises these moments. His peak – between 2016 and 2018 – was not merely a purple patch; it was a golden era of batting.

Yet, as the runs never stopped and fifties became hundreds, he ran the risk of falling victim to his own greatness, for this was a period when his “sixties became failures”. You knew he had achieved the highest pinnacle in a sport that prided itself in being fickle to even the best in the business. What else was there for such a player to achieve?

The pandemic put a halt to Kohli’s progression, as it did to everyday lives. Normalcy was hindered by lockdowns. Lifestyles altered. Mundane, claustrophobic routines set in. Mental health took a hit. Productivity reached all-time low. Rustiness crept in. Perspectives changed. Life seemed unfair but we remained grateful. Nothing made sense, but it all added up too, for the biggest challenge was adapting to and living with the new normal: a world where everything mattered but nothing did.

Our species were up against arguably the darkest time in recent years. Getting out of bed was the goal for Day One. Day Two was a success if you matched your pyjamas. Day Three was about shrugging off the easy recipes and cooking a favourite meal. Day Four could be about cleaning it all up. Everyday things, mundane things, unimportant things. Suddenly big, joyful things.

On Thursday, this crept up on us. The disappointment of India’s ouster from the Asia Cup – a tournament they were touted to win – was palpable as they took on Afghanistan in an almost empty stadium in Dubai. The “chokers” tag was out again.With the T20 World Cup looming large, the sub-par showing was enough to keep spectators away. The game began with the normal screening of the playing XI, which led to bigger question marks after Rohit Sharma decided to rest himself. Viewers switched off. There was no point.

Only for things to rapidly change in the span of 19 overs. Kohli, who got the opportunity to open the innings in Rohit’s absence, had an iffy start, but the relaxed mindset after the recent break was evident as he remained unperturbed and rectified his errors upfront. There was no chasing balls on the fifth stump. An ugly back-foot pull in the fourth over was never seen again. While his game against pace was never in doubt, in Dubai, his skill against spin was the biggest talking point.

He swept, he lofted Rashid Khan for a gorgeous six, ran down the track against Mujeeb Ur Rahman’s googlies and dismissed them for straight boundaries. There was a lucky escape when Ibrahim Zadran dropped him in the eighth over, but instead of being desperate to move on, he grooved to the beats of the popular Bollywood number ‘sadi galli’ moments later. If it felt arrogant, the four that followed signalled a quiet confidence that is typically Kohli.

As he entered the eighties, fear took over us. No jinxing. Do not take his name. Do not tweet about him. Hearts were racing. Were he to be dismissed now, it would be a disaster that would take days to heal. A four, bludgeoned down the ground, took him into the nineties. Commotion followed. Not now, surely don’t get out now. Every known god was summoned. Eyes remained glued to all sorts of devices. The beads of sweat running down our foreheads had nothing to do with the extreme conditions in Dubai he was batting in.

As the cheers reached a crescendo, he got there, with a six so nonchalant that it contradicted the emotions that we felt at that moment. No.71 was here. It had taken a thousand and twenty days. The joy and relief on his face were soon overpowered by the sight of an elderly fan in the background bowing to The King as he applauded a magical innings by a magical player. He was all of us. I screamed, or was it a shriek? Goosebumps, tears, an excitement like nothing before. We jumped in joy. We were kids once again.

Kohli, in many ways, reflects the happenings of the world in the last few years. When achievements became ordinary, a stoppage like no other was needed to remind him, and us, of what really mattered. Love for life, love for the sport. There was chaos, there were unfavourable results and unfair occurrences. Questions over the future remained unanswered. Perspectives, a term he has used a zillion times of late, have changed. No low is worth stressing over, no obstacle that can’t be overcome.

The gap between his tons also reminded us once again of the unfiltered joy every Virat Kohli century brings. When they were a dime a dozen, we had failed to soak in the moments. But take them away, starve us of them, and the Economics lessons on Demand and Supply suddenly make sense. We promise never to take them for granted again.

The Asia Cup failure, for one day, did not matter. The political situation in the country did not matter. Neither did the bickerings. We were united after the longest time, grooving to the beats of “Kohli, Kohli”, with a large, ugly open-mouthed smile that only he can bring out in us.

The threat of COVID-19 is slowly passing away. Kohli is back scoring hundreds again. The world seems a teeny bit normal again.