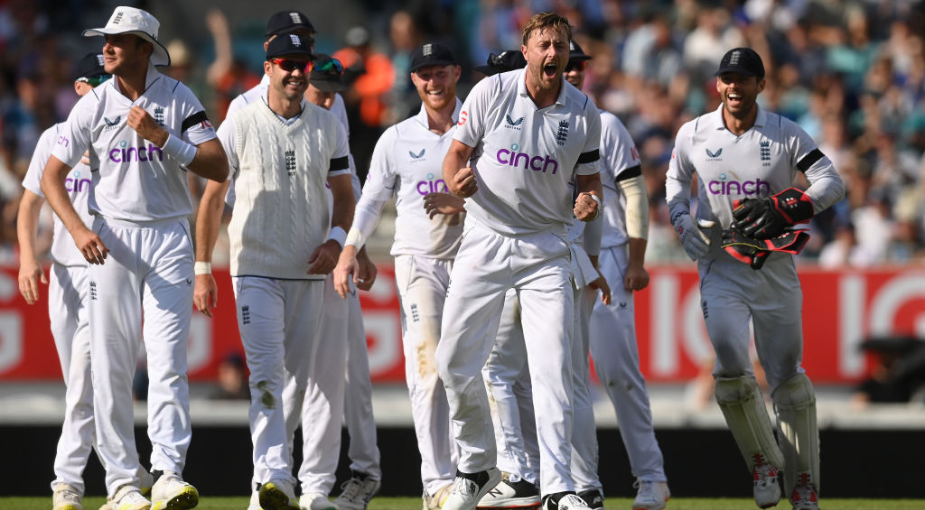 England won the three-match Test series against South Africa 2-1, and here is a combined team featuring players from both sides.

The opener was massively questioned after a string of poor showings before the tour, which intensified after his twin failures in the first Test. However, he turned it around well, first scoring a fighting 38 off 101 balls at Old Trafford before capping off the series with his first fifty in 16 innings.

Erwee played one big knock in his five innings in the series, scoring a confident 73 off 146 in the first innings of the first Test. After England were bowled out for 165, the opener took on the responsibility and saw off the new ball, piling on 85 runs for the first wicket with Dean Elgar.

The batter ended as the leading run-scorer in the series and was the only batter to pass 50 twice. Pope was the only batter who offered any sort of resistance on the first morning of the series, scoring 73 when no other batter could cross 20. He was the saviour at The Oval too where he counter-attacked to make a quick 67 off 77. The next highest score in the innings was 14 as England were bowled out for 158.

Bairstow had a tough time after being the star earlier in the summer, going without a single fifty in the series. However, he makes the team courtesy of his 49 in Manchester. After the hosts had lost the first three wickets for 43 runs, Bairstow combined with Crawley to steady the ship. While the latter made a patient 38, Bairstow was more attacking, getting his runs in 63 balls.

The England captain was one of the stars in the short series, standing out with both bat and ball. He struck 103 at Old Trafford after England’s early collapse, which eventually helped the hosts post 415-9d on the board and inflict an innings defeat on South Africa. His bowling was terrific as well. He picked up at least two wickets in every innings that he bowled, including taking a three-wicket haul twice.

The lanky South Africa all-rounder’s stellar run in Test cricket continues. He batted in only three innings but left a mark in two of them. His 48 at No.6 in the first Test helped the visitors pile on a match-winning first innings score as they moved to an innings win, while he top-scored in the first innings at The Oval, making 30 in 59. With the ball, he started off with two wickets in each innings in the first Test before claiming his maiden five-for in the last game.

Only Pope had a better average in the series than Foakes. He showed resilience in the second Test, walking out to bat when the scorecard read 147-5, taking 217 balls to score 113. It was his second Test ton and his first since his debut game in November 2018.

The pacer was the joint-leading wicket-taker in the series, capturing at least three wickets in four of the five innings that he bowled. He overtook Glenn McGrath’s Test wicket tally and is now perched in the top five list of most wickets taken in the format. Having not been picked for the Windies tour at the start of the year, which forced him to contemplate retirement, his – as well as James Anderson’s comeback – has been inspiring.

Rabada won the Player of the Series award for South Africa, ending with 14 scalps – the most by a bowler from his side. While his bowling antics were not unexpected, the highlight was his batting efforts in the first innings of the second Test, when he top-scored with 36 as his team were all out for 151.

Robinson finished with the best average among all bowlers who picked up at least 10 wickets in the series – that despite playing only two Tests in the series. He formed a lethal new ball pair with James Anderson and bagged a match-haul of 7-89 in the third Test.

The 40-year-old veteran showed no signs of stopping: he troubled the openers game after game, and picked up a wicket in every innings that he bowled.

Asia Cup 2022 Shows How, For International Cricket To Survive, Bilaterals Alone Won't Do