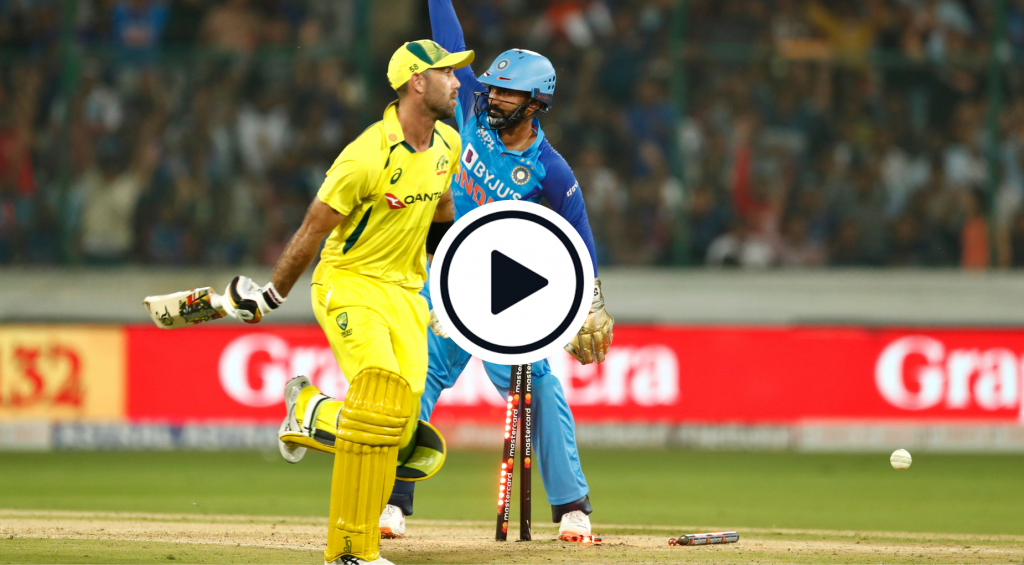 Watch Dinesh Karthik’s luck was in after Glenn Maxwell was run out by an Axar Patel direct hit, despite the wicketkeeper disturbing the stumps before the ball arrived.

With the score at 75-2 after 7.3 overs, Australia were flying along courtesy of a 19-ball half century from 23 year-old sensation Cameron Green, who scored the joint fourth-fastest fifty of any Australia batter.

However, his teammate Glenn Maxwell, who shares the record for the fastest-ever fifty for Australia with David Warner (18 balls) was struggling to get going and was on just five runs off 10 deliveries.

Maxwell, facing Yuzvendra Chahal, pulled the ball into the legside and turned for two when Axar’s throw from the deep came in. Karthik, who was looking to take the ball in front of the stumps, knocked the wicket with his arm which saw one of the bails fall to the ground. However, the second bail remained unbroken on the wicket, a fact that quickly changed as the ball crashed into the stumps meaning that Maxwell was still run out.

A clearly frustrated Maxwell was forced to leave the pitch. His frustration was clear as his dismissal concluded a disappointing series for the Australian, who recorded three single-figure scores.

This match is the third and final game of a three-match T20I series between India and Australia ahead of the T20 World Cup. The series is tied at one apiece after Australia won the first game by four wickets before India claimed the second in a rain reduced eight-over shootout. Australia finished their innings on 186-7, with Tim David top scoring with 54.