Salt Or Hales? Wisden Writers Have Their Say On Who Should Open With Jos Buttler 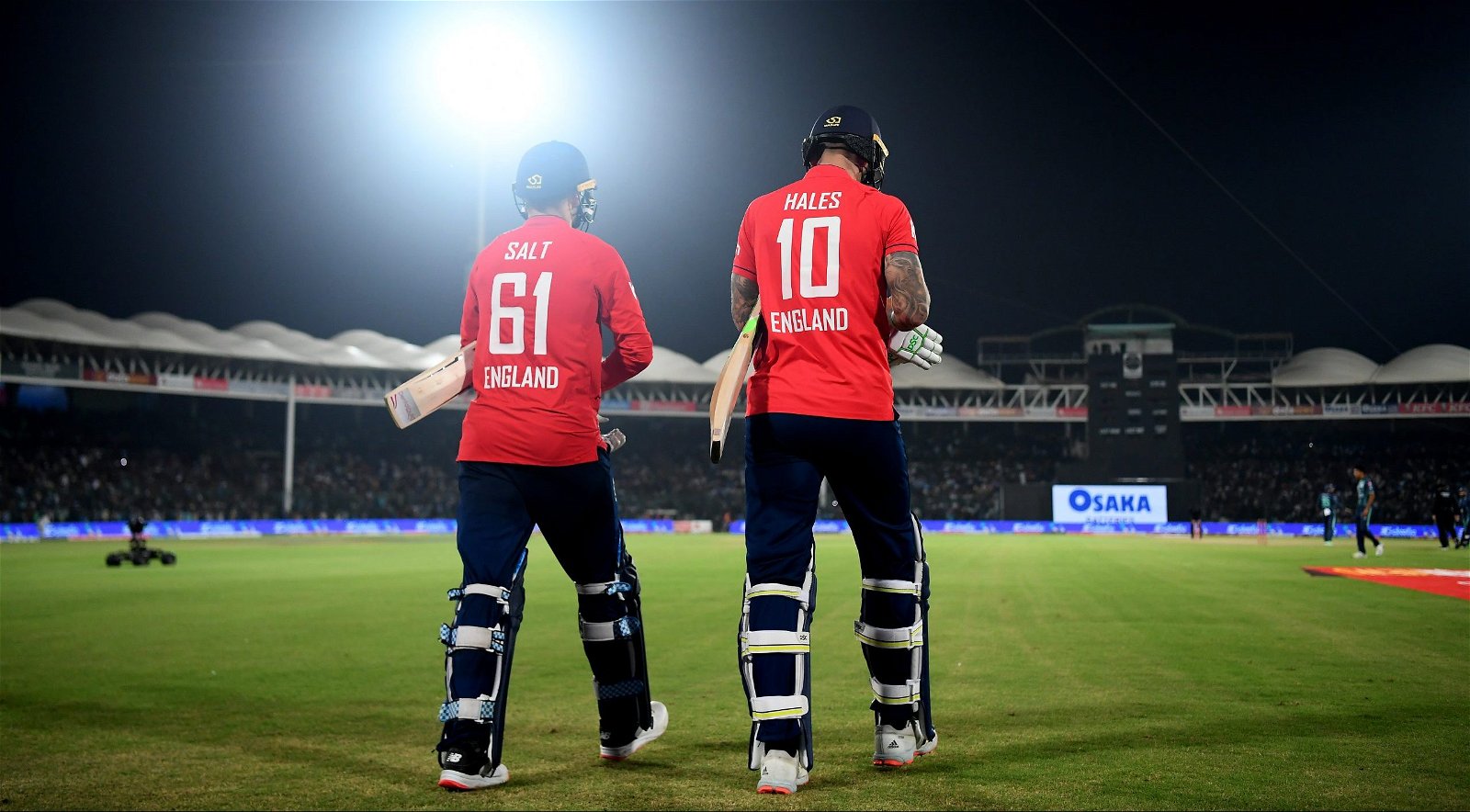 While England’s T20 World Cup plans are falling into place, one of the key questions they have left to answer is who will open with Jos Buttler: Phil Salt, or Alex Hales?

Up until this summer, Jason Roy was the clear choice. But a torrid run of form in both international cricket and The Hundred saw him lose his spot. Announcing England’s T20 World Cup squad, Rob Key stated that Jonny Bairstow would move up to the top of the order, as he has done successfully in ODI cricket, only for a freak injury as that press conference was in progress to rule him out too.

Salt was the back-up opener in the original XV, and has been a regular in England squads in recent times. But the identity of the man called up to replace Bairstow raised the intriguing prospect of a leapfrogging, with Hales’ time in the international wilderness coming to an end. Which of the two England choose to face the new ball alongside Buttler could determine England’s success or otherwise at the T20 World Cup. Four of Wisden’s writers argue for their preferred option.

Phil Salt has had a good year. He has emerged from a formidable pack of pretenders to firmly establish himself as England’s Next Man In in limited overs cricket, earning opportunities in both white-ball formats at both the top and in the middle order. He has done well, batting with a sense of selflessness that appeals to the England management and in Pakistan where he was engaged in what was practically a shootout with Alex Hales, outperformed the man seven years his senior.

Despite all that, I’m going firmly with Hales. While Salt has decent overseas experience, he’s not exactly demanded a place with his performances in franchise cricket. His Pakistan Super League record is poor, his Big Bash League numbers do not leap off the page and in 2022, these are as good an indicator for success as a handful of bilateral series. Even against Pakistan, his 88 not out came against an attack some way off the bowling group Pakistan are likely to deploy in their T20 World Cup opener. Hales, meanwhile, has a superb BBL record, has a T20 World Cup hundred to his name already and is vastly experienced against the calibre of bowling you’d expect at a major tournament. Salt has not let himself down at all, but opting for the 26-year-old would be a punt England do not need to take.

As much as the noise coming out of the England camp is that Hales will get the nod over Salt, if the Pakistan series was a straight shoot-out between the two then Salt should have a nose in front in the selection race.

He had a better series against Pakistan than Hales, who looked scratchy even when scoring his only fifty-plus score in the first T20I. While he had a slow start, Salt’s stellar innings in the second match in Lahore seemed to unleash the shackles and he looked much more fluent in the final match before being run out.

So much is made of Hales’s BBL record, which seems to be the main factor in England’s selection but form has to be the more important consideration. Salt has a pretty good BBL record himself, although not as good as Hales, and he would be a far more reliable fielder if Jos Buttler retakes the gloves. It’s a very marginal choice between the two, but Salt just takes it.

This is a real ‘head v heart’ debate for me, with the former favouring the experience of Hales, and the latter tempted by the tenacity of Salt to open with Buttler. The latter has done plenty to bolster his case in recent months, with a half-century in a new role on T20I debut, a stellar Hundred campaign, and a resurgent end to the Pakistan T20Is, showing why he England have placed him at the head of the queue.

He brings the extras too, a livewire in the field whether behind the stumps or elsewhere, and despite the baggage which has weighed down Hales. Despite all this, it’s Hales who wins out, just. While there was little new-ball explosiveness against Pakistan, he has earned a reputation as one of the best top-order biffers in the world in the past few years, with the latest iteration of Hales, improved against left-arm spin and so without an obvious weakness, a better player than when he was left out by England.

There’s the Big Bash runs, of course, and the big-game runs too, with a T20 World Cup century and a 90-odd in the first game of the 2017 Champions Trophy bolstering his case. This is a tight decision, and the form of Salt and Hales alongside Buttler against Australia might well prove decisive. For now, however, Hales has the edge.

The leading overseas run-scorer in the history of the Big Bash. A shock recall after more than three years in the wilderness. The baggage associated with that decision. His pedigree in Australia. Alex Hales has built a compelling case to open for England at the 2022 T20 World Cup, and one that’s difficult to ignore. But that’s what I’m going to do.

England lined up for the 2021 T20 World Cup in the UAE with Jos Buttler and Jason Roy at the top of the order. Had the latter not suffered a dramatic slump in form this summer, they would have done so again. In Roy’s absence, Phil Salt is the perfect player to assume the role of England’s fearless lunatic. A bundle of energy – exhausting at times in the field but always entertaining – and a selfless cricketer who bats with relentless intent, the Lancashire opener ticks all the boxes.

Both Salt and Hales endured a fairly lean series against Pakistan, but the former’s blistering 88* off 41 in the sixth game reminded everyone what he’s capable of. It felt as though we were in for a similar innings in the seventh, too, before he was run out by Dawid Malan.

Hales managed 53 off 40 in the opening game and started quickly in the penultimate match, but across the series it was Salt who looked the more free-flowing and confident player, striking at 169.23 in the powerplay.

Matthew Mott has confirmed Buttler will keep, but should the captain’s return from injury not go to plan then Salt’s ability with the gloves – and his chat – is an added bonus. Even without the gloves Salt is an attractive option, while Hales did himself no favours in the field during the Pakistan series.

Buttler’s also seen what Salt has to offer up close and personal during The Hundred, in which Salt kept brilliantly and finished as the second leading run-scorer with 353 runs at an average of 39.22 while striking in excess of 150.

For what it’s worth, I think they’ll both have a role to play in England’s campaign but for me, it’s Salt who should open against Afghanistan.

After all, he was selected in the squad before Hales, which should suggest some sort of hierarchy. If Hales plays after a fairly ordinary reintroduction to international cricket, that doesn’t say much about the selection process.