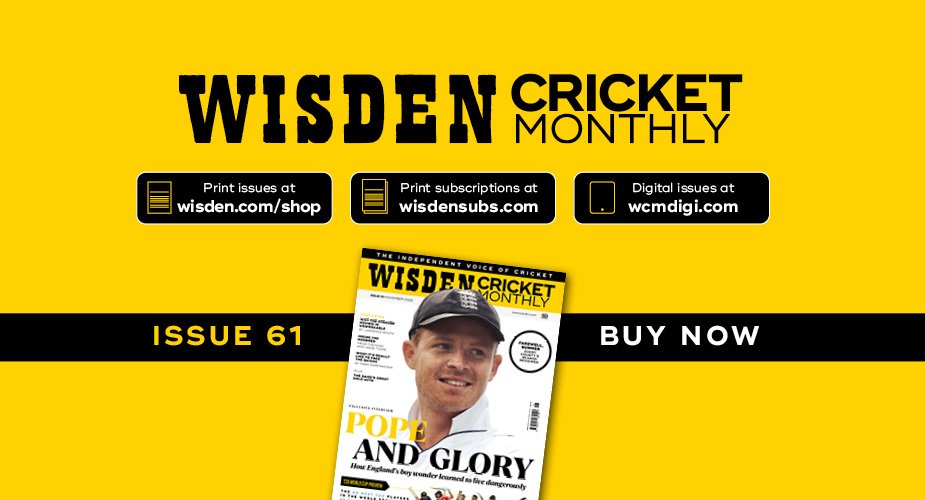 Ollie Pope is the cover star of the latest issue of Wisden Cricket Monthly, out October 13, as he reflects on a golden summer which featured a big promotion, a County Championship title and a starring role in England’s red-ball revolution.

“It feels like our team now,” England’s No.3 tells Jo Harman in an exclusive interview. “In the past it’s probably been playing for your spot, but now it feels like a team that in a way we own.”

Elsewhere, we look ahead to the Men’s T20 World Cup in Australia with a rundown of the 20 best T20 players on the planet, as selected by the data analysts at CricViz, and we go inside The Hundred, speaking to fans who attended matches this summer about their contrasting experiences of the controversial tournament.

We round up the county season by reviewing how all 18 counties fared, we have exclusive interviews with ex-England coach Trevor Bayliss and legendary former Australia captain Mark Taylor, plus a photo-led feature on cricket’s greatest solo acts.

As for our columnists, Mark Ramprakash lifts the lid on what it’s really like to face express fast bowling, Raf Nicholson reviews a tumultuous summer for the England women’s side, Lawrence Booth argues Andrew Strauss’ high-performance review is unworkable, and Andrew Miller tells English cricket to grow up following the fallout from Deepti Sharma’s run-out of Charlie Dean. Before Andy Zaltzman rounds things off with the deepest of dives into the significance of the number nine.

You can buy the magazine in stores across the UK (click here to find your nearest stockist) or purchase a subscription here.

Wisden Cricket Monthly is also available in digital form. You can purchase single issues or sign up for a subscription here.

10 standout quotes from the new issue:

“I found it so frustrating. I’d do anything to succeed in Test cricket and I couldn’t work out why I wasn’t taking my performances for Surrey into that arena.”
Ollie Pope on a transformative summer 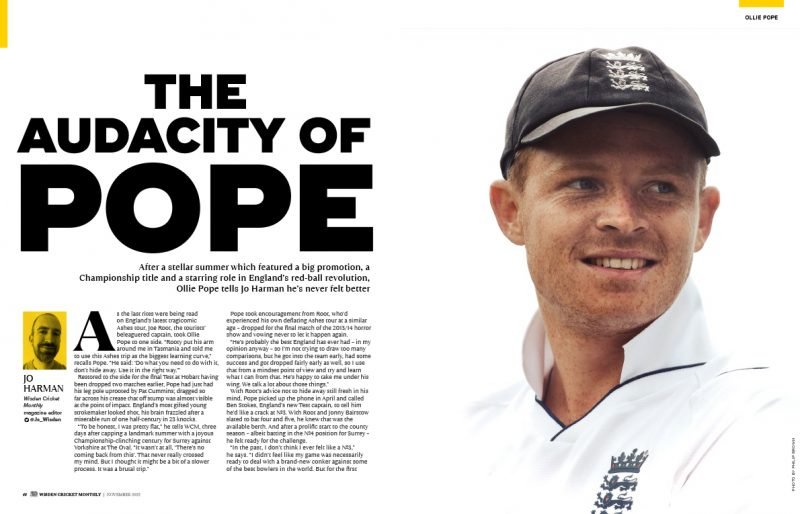 “Between them, Buttler and Moeen managed to sound as bewildered as Liz Truss on local radio, so wedded to their team’s entrenched dogma that retreat to safer ground now seems virtually impossible.”
Andrew Miller on the reaction to Deepti Sharma’s controversial run-out of Charlie Dean

“If someone can bowl at 90mph and have one or two variations of pace, whether it’s a knuckle ball or back of the hand slower delivery, the world is their oyster. So why would a young fast bowler put wear and tear on their body when it comes to playing the longer format? It’s a no-brainer.”
Mark Ramprakash on the future of fast bowling in Test cricket

“I love first-class cricket but I don’t see how its future is secured by a handful of people like me.”
David Wright is one of the many contributors to Phil Walker’s piece that goes inside The Hundred, speaking to fans who attended matches this summer 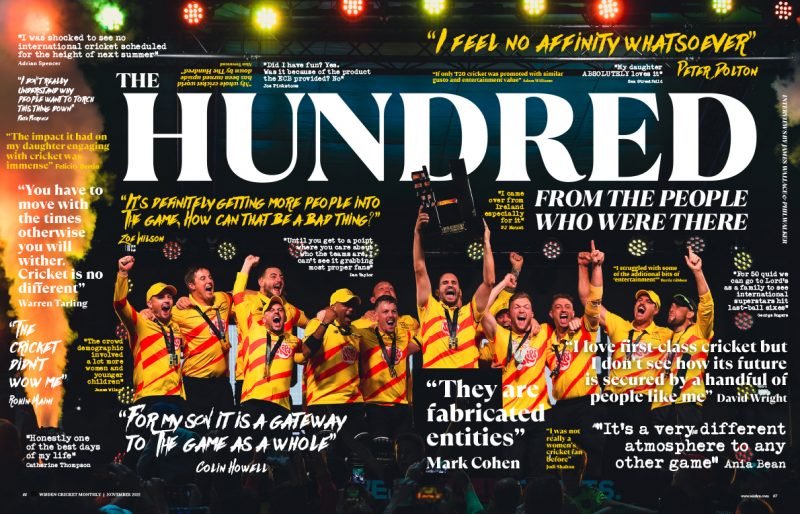 “Strauss wants a sport fit for purpose in the white-ball era, in which young players will be tempted off the franchise treadmill to play at least some red-ball cricket, and prevent its disintegration. If that means upsetting those who love the county game because of the trips to Scarborough, Cheltenham and Canterbury, because of the fellowship, the gentle tradition and the genteel tribalism, then he considers it a price worth paying.”
Lawrence Booth on Andrew Strauss’ high-performance review

“In many ways, Tim David is the stereotypical T20 biffer: 6ft 5in, built like a boxer, doing his best work over cow corner, backing it all up with a bit of tweaking finger spin. On the face of it, he is just the latest Big Tall Aussie to find success on the short-form circuit. However, David’s route to the top is far from familiar.”
Ben Jones profiles Tim David, the Australian big hitter, who features in our list of the 20 best T20 cricketers in the world 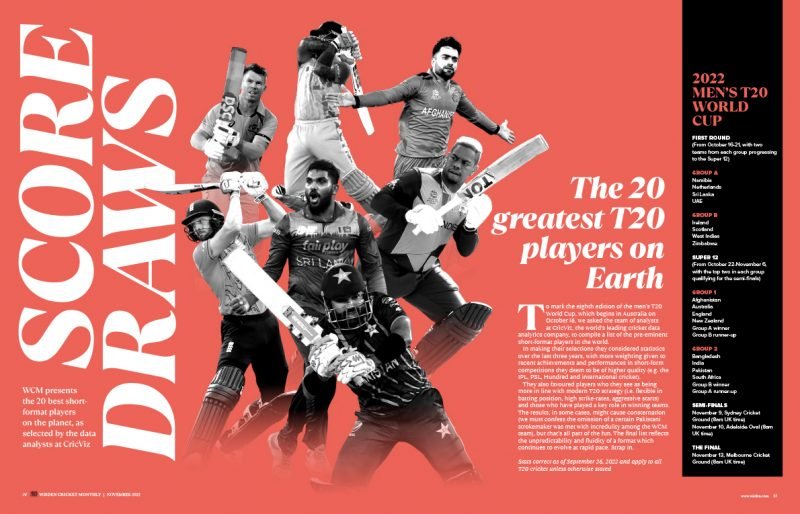 “Watching SKY, there is no sense of a player simply pressing a button to deliver a set response to a given ball. He is a batter who exists in a purely reactive space. Anything could happen in the moment between release and connection. Any delivery can be sent anywhere. It makes him a bowler’s and a captain’s nightmare. Hope is often the best form of defence.”
The majestic Suryakumar Yadav also features in our rundown. Ben Gardner examines what makes him so special

“Not since Sarah Taylor has an England player looked at home so quickly in international cricket as Alice Capsey.”
Raf Nicholson on a shining light in a difficult summer for England Women

“I didn’t want people to assume that I only batted on to get past Bradman’s score, that was never the way I played.”
Former Australia skipper Mark Taylor on declaring his team’s innings when he was unbeaten on 334, as part of an interview with James Wallace on the defining moments of his career 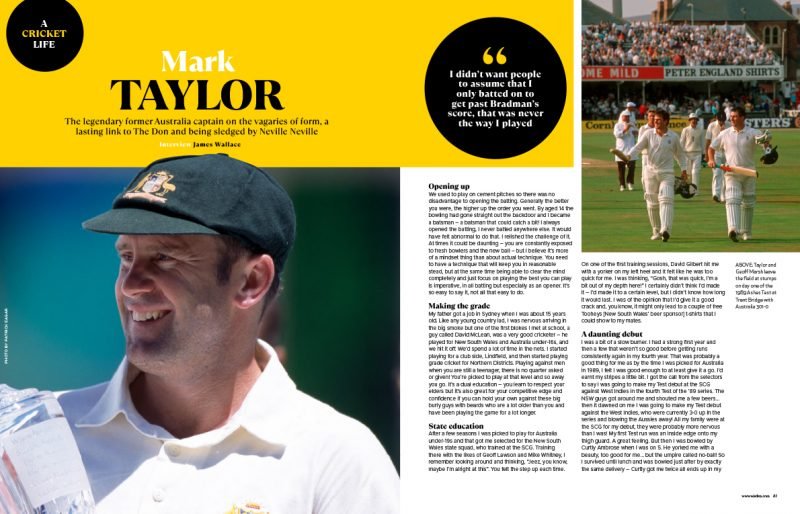 “I did talk about a positive and aggressive approach early on [with England], but I spent the next four years trying to explain that being positive or aggressive meant mentally. If you are in that frame of mind, you make good decisions.”
Former England men’s coach Trevor Bayliss speaks to John Stern 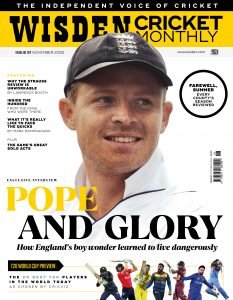