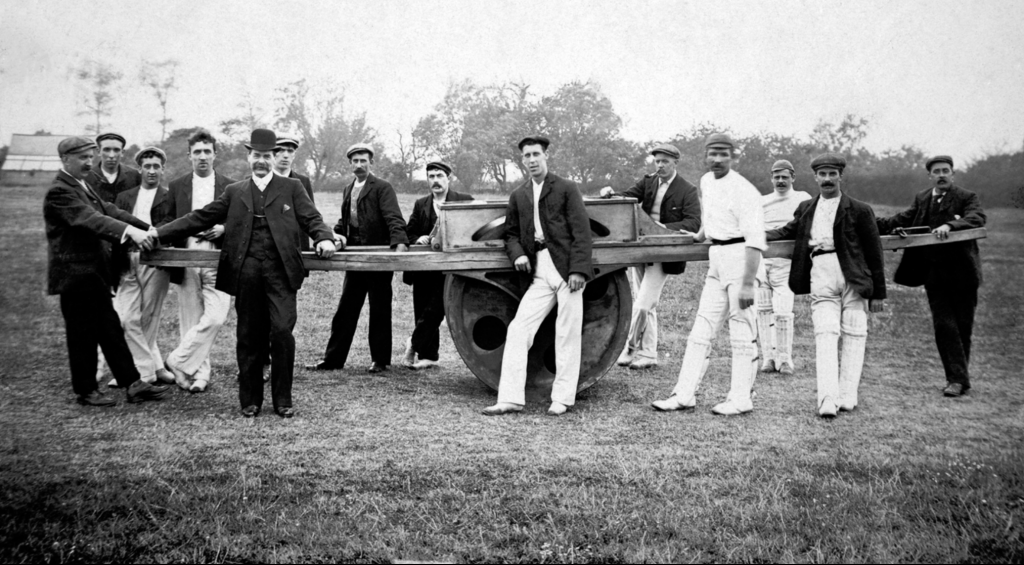 For the 2022 Wisden Cricketers’ Almanack, Andy Bull detailed the origins and the continuation of arguments over who decides what makes a good Test match pitch.

It all started with an argument. Perhaps the oldest surviving account of a cricket game is a Latin poem written over 300 years ago by William Goldwyn, a Cambridge scholar. It opens with a description of England in spring, and the players arriving at the ground: they greet each other, and almost immediately start to bicker. There were no laws nor lawnmowers, so compromise was required before the match could start. Where, for instance, to pitch the wickets? Soon, as Goldwyn puts it, the teams “are mingling quarrels and mutual rage as each want to impose their own rules on the game”.

In The Cricketers of My Time, published in 1832, Hambledon’s John Nyren hints at the nature of the argument. First, he wrote, you needed to consider the wind: “If you have one slow and one fast bowler, pitch your wickets right, and down the wind – a slow bowler can never bowl well with the wind in his face. If your bowling is all fast, and the opponents have a slow bowler, pitch your wickets with a cross wind, that you may in some degree destroy the effect of slow bowling.”

Then came topography. “If either of your bowlers twists his balls, favour such twist as much as possible by taking care to choose the ground at that spot where the ball should pitch its proper length, a little sloping inwards.” And this was just the rudimentary stuff: the great bowlers turned the process into a proper study. Hambledon’s champion, David Harris, “became so well acquainted with the science of the game of cricket that he could take a very great advantage in pitching the wickets”. He would be out pacing the field at dawn on the day of a match, picking out the best patch of ground. It was, suggested Nyren, his greatest strength.

Harris’s great rival, Edward “Lumpy” Stevens of Surrey, preferred a pitch with a brow, causing his deliveries to scuttle at the stumps. “Nothing delighted the old man like bowling a wicket down with a shooting ball,” wrote Nyren. “When by this forethought and contrivance the old man would prove successful in bowling his men out, he would turn round to his party with a little grin of triumph.” Harris, on the other hand, would choose a “rising ground to pitch the ball against”, so his bowling tended to spit at the batsman. “Consequently more players would be caught out from Harris than Lumpy, and not half the number of runs got from his bowling.”

Already the pitch was disputed territory, and not, as you might think, the home side’s prerogative. For a time, Nyren said, it was the custom in Hambledon for the side “going away from home to pitch their own wickets”. In Goldwyn’s poem, the dispute is settled by a wise man in the crowd, “a Daniel come to judgment”, in one translation. He persuades the teams to compromise, and mark out a pitch “where the level surface stretches flat all around”.

These were not simple sporting disagreements. In those days, huge sums were wagered on some games, and it was not unusual for teams to sue each other if they reneged on bets. In September 1718, the Saturday Post reported on a match between London and Kent at White Conduit Fields. The purse was half a guinea a man, but three Kent players absconded before they batted because they knew their team would lose. They blamed the coming rain, and proposed a rematch for double the stakes. The case went to court: the judge ordered a replay the following year.

The first set of known written rules are the “articles of agreement” drawn up in 1727 for two home-and-away matches between teams representing the Duke of Richmond and Viscount Middleton. They specified that the home umpires, selected by the noblemen captains, should choose where to pitch the wickets, but obliged them to pick “a fair and even place”. This ambiguity allowed home advantage, so long as no one tried to take it too far. Since it depended on the definition of “fair”, this was a grey area. It wasn’t just a practical issue – a matter of finding and preparing a fit, flat patch of ground – but a moral one.

This idea still exists. Cricket is strange that way: pitch conditions mean the home side have a greater advantage than in almost any other sport, despite the implication that it would be unfair to exploit it too obviously. Then again, some exploitation is more equal than others: witness the punishments handed out to Northamptonshire for producing spinning surfaces a couple of decades ago, and to Somerset more recently, but the general shrug of shoulders when other counties routinely prepare greentops.

A newcomer to cricket may ask why the home team shouldn’t be allowed to do everything in their power to improve their chances. After all, other sports employ plenty of ruses. In 2018, Norwich City painted the away dressing- room at Carrow Road bright pink to “lower the testosterone levels” of opponents. At Turf Moor, Burnley installed a small door, obliging visiting teams to stoop on their way out. Rugby union sides arriving at Edinburgh’s Murrayfield have complained for years about being held up by a funereal marching band, who pace ahead of the team bus on the way into the stadium. Ryder Cup sides both set up home courses to suit their style of golf. In cricket, the situation is complicated by debate about the national team’s interests, although anyone arguing that Somerset’s pitches have been detrimental to England’s prospects may also concede that the two spinners in last winter’s Ashes squad, Jack Leach and Dom Bess, both grew up playing there.

There is something else going on – and it has its roots in those early disputes at Hambledon, and the notion of a “fair” surface. As soon as the characteristics of the pitch skew too far in favour of the hosts, a row breaks out.

In 1905, Yorkshire’s F. S. Jackson gave a speech damning the “Southern counties” for preparing wickets so that “it was almost impossible for any bowler, however good, to get even the slightest work on the ball”. This practice, he said, was unknown in his county, “where they always tried to play the game as it was meant to be played, on natural turf”. And in the 1950s, Jim Laker and Tony Lock bowled England to Ashes victory on pitches the Australians insisted had been “specially doctored” under orders from the selectors; Gubby Allen, the chairman in 1956, always claimed innocence.

On it went. In 1975, John Arlott wrote “no one can seriously deny the fact that the Test pitches in England were deliberately made sluggish to reduce the effectiveness, perhaps even the danger, of the Australian fast bowlers. Similarly in the previous season the spinners who were India’s main strength were denied any bounce or turn. Too many touring sides of recent years have returned home convinced that a perfidious Albion had doctored its soil to its own advantage.”

Thirteen years later, the English authorities were in the middle of a crackdown on pitch-manipulation in county cricket, which didn’t stop them asking the Old Trafford groundsman, Peter Marron, to prepare a spinning surface for the Third Test against West Indies, in the hope of hobbling their quicks. England picked two slow bowlers: John Childs and the one-off captain, John Emburey, who took the new ball. They managed one for 145 between them. Malcolm Marshall, meanwhile, dropped his pace, and returned match figures of nine for 41; West Indies won by an innings and 156. “Don’t ever try that again,” Viv Richards is supposed to have told England.

There are echoes of all this in the row that broke out during the tour of India in 2020-21. After a handsome victory at Chennai, England were badly beaten on spinning pitches in the next three matches. The low point came in the Third Test at Ahmedabad, where India won inside five sessions, and five spinners took 28 of the 30 wickets. England’s players kept their own counsel, though Joe Root hinted at his feelings when he said India would face “really good pitches” on their return tour a few months later. Some of his predecessors as captain were blunter. “Tough to watch”, said Alastair Cook; “awful”, said Michael Vaughan; “a lottery”, said Andrew Strauss.

India’s response was led by India’s off-spinner Ravichandran Ashwin, who had taken seven of those 28. When an English journalist asked him if it had been “a good pitch for Test cricket”, and whether he wanted “a similar surface in the next match”, Ashwin replied with questions of his own: “What is a good cricket surface? Who defines it?” The journalist suggested a balance between bat and ball. Ashwin agreed, then repeated his questions.

Of course, they were rhetorical: it is the ICC who define the quality of a pitch, on a scale ranging from “very good” to “unfit”. And Ashwin was familiar with their criteria. As he put it: “Seam on the first day, then bat well, then spin on the last two days?” It wasn’t far off: the ICC’s pitch-monitoring tool defines a “very good” pitch as one which offers “good carry, limited seam movement and consistent bounce throughout, little or no turn on the first two days, but natural wear sufficient to be responsive to spin later in the game”. A “poor” pitch offers either “excessive seam movement or unevenness of bounce at any stage, excessive assistance to spin, especially early in the match, or no or little seam movement, spin, bounce or carry”.

The idea is to provide “a balanced contest between bat and ball over the course of the match, allowing all the individual skills of the game to be demonstrated at various stages”. In short, a pitch should do a little of everything, and not too much of anything.

How much is too much? It depends what we understand by “excessive” – which means the regulations are, in effect, a more complicated version of that single word used in 1727: “fair”. The interpretation is so loose that only one international pitch in the last four years has been rated poor: the Wanderers at Johannesburg in January 2018, when the umpires ended play 20 minutes early on the third evening after South African opener Dean Elgar was hit under the grille by India’s Jasprit Bumrah. Even South Africa didn’t try to defend it. The Ahmedabad pitch, on the other hand, was rated average.

If the regulations read like an attempt to please everyone, it may be because everyone wants something different. Fast bowlers want pitches to be hard and green, slow bowlers dry and dusty, batsmen true, chief executives durable, spectators entertaining, and coaches whatever gives their team the best chance. Ground staff, you suspect, simply want the critics off their back.

And that’s what Ashwin seemed to be getting at. There was a lot to unpick in his exchange with the journalist, since the question implied India had fixed the pitch to suit their strengths, produced a surface so tricky for batting it resulted in a game of chance, and robbed spectators of over three days of cricket. His answer came across as a challenge to the moral authority of the English, and tapped into old charges of arrogance, exceptionalism and hypocrisy. Simmering beneath was the idea of fairness: how far it stretches, who defines it. John Nyren might have chuckled at the familiarity of it all.

Why England Have Picked Liam Livingstone For The Pakistan Tests