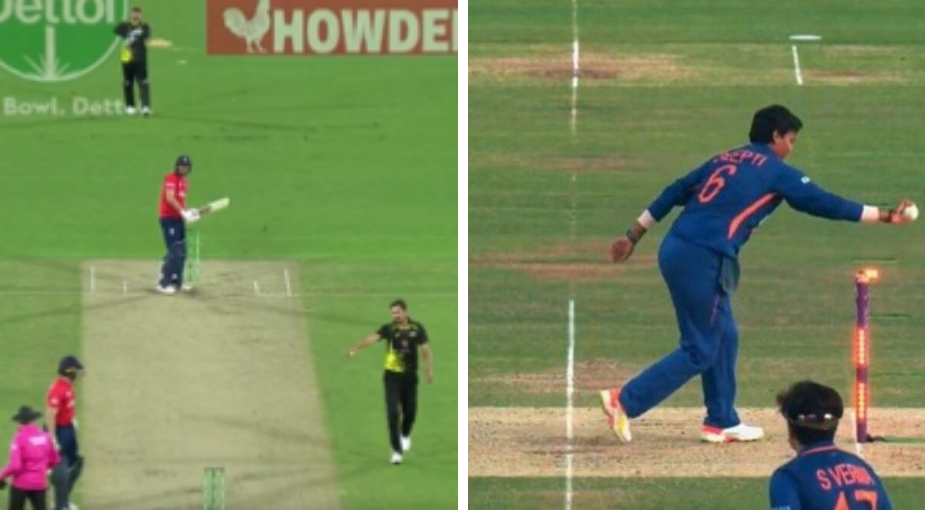 Mitchell Starc has been criticised for warning Jos Buttler, who was backing up early during the third Australia-England T20I, by saying he wasn’t Deepti Sharma, the India all-rounder who recently made news for running out Charlie Dean at the non-striker’s end.

The incident revolving around Deepti and Dean sent the cricket world into a debate 0ver the contentious mode of dismissal, running out the non-striker. The India all-rounder dismissed Dean for backing up early to win the Lord’s ODI, leading to a heated ‘Spirit of Cricket’ discussion over the following weeks. While the India player claimed the team had warned Dean before inflicting the run-out, England captain Heather Knight, who was not a part of the series, accused the Indian camp of “lying”.

Just as the incident was dying down, Starc referenced Deepti’s act during Australia’s third T20I against England. After bowling the fourth ball of the fifth over to Dawid Malan, Starc pointed to non-striker Buttler, warning him to remain in his crease until after the ball had been released. As he was walking back to his run-up, the stump mic caught the speedster saying, “I’m not Deepti but I can do it. Doesn’t mean you can leave your crease early.”

Buttler replied by claiming, “I don’t think I did.”

However, images shared on social media suggest otherwise. Before the warning, Buttler was seen wandering out of his crease before Starc had bowled the ball. After the warning, the England captain ensured he wasn’t backing up until the delivery had been sent down.

Mitch Starc pointed out to Jos Buttler that he was leaving his ground before Starc released the ball.

Buttler replied “don’t think I was”.

These pics are from the ball before and the 3 balls after Starc made the comment. #AUSvENG pic.twitter.com/WruM3URh5y

Had Starc taken off Buttler’s bails, it would have been his third such dismissal in that manner. The wicketkeeper had been run out at the non-striker’s end by Sachithra Senanayake in an 2014 ODI, and then again in 2019 by Ravichandran Ashwin during an IPL match.

This is not the first time that Starc has warned a player for a run-out at the non-striker’s end. Last year, he warned Marnus Labuschagne to stay in his crease during a Sheffield Shield match, while in 2020 he sent out a similar warning to Adil Rashid during an ODI.

Starc’s reference to Deepti, however, has not gone down well with Indian pundits, who have gone after him for adopting a “non-existent moral high ground.” The most cutting criticism came from former India international Hemang Badani who said, “Grow up Starc. That’s really poor from you.”

Grow up Starc. That’s really poor from you. What Deepti did was well within the rules of the game. If you only want to warn the non striker and not get him out that’s fine and your decision to make but you bringing Deepti into this isn’t what the cricket world expects of you https://t.co/vb0EyblHB8

You got to know about the rules of the game and have the discipline (and courage, because y’all can’t stop taking the non-existent moral high ground) to follow it to be Deepti. So maybe do that, Mitch. Be better. pic.twitter.com/4JaGJpMx7E

I’m not like her – not an unsporting, unfair, cricketer but I could have been her – so appreciate how sporting I am.

The run out will continue being criticised because of this thinking. I’m not Mankad, I’m not Ash, I’m not Deepti.

Viewers in India can watch the incident here:

WATCH: David Warner survives a nasty blow on the head ahead of T20 World Cup 2022