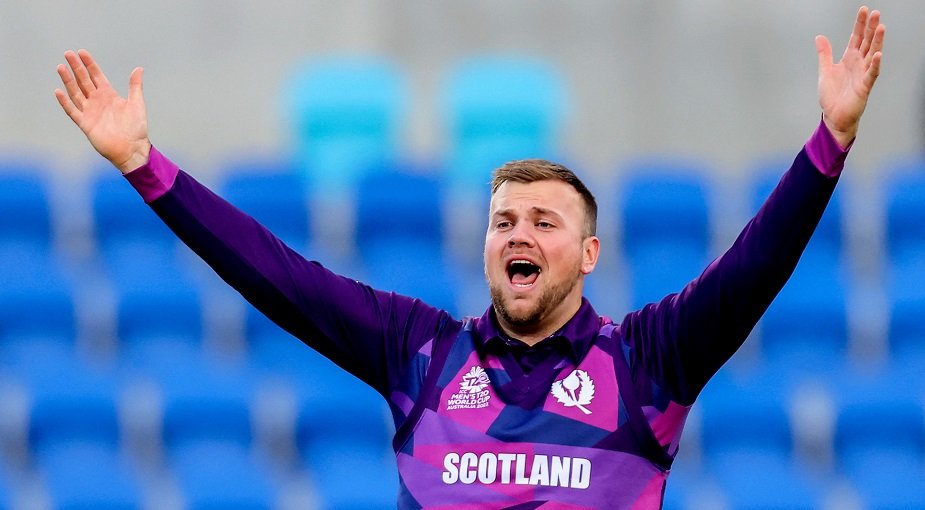 Over the years, Mark Watt has made left-arm finger-spin, perhaps the least glamorous of all the bowling genres, an utterly watchable craft. What he needed was a place in history, and the T20 World Cup game against West Indies gave him that.

A statistic about Watt and his 23s did the rounds roughly the same time last year. He had bowled his full quota in each of his first six matches at the T20 World Cup – and had conceded under a run a ball in each of them.

In his sixth, against eventual runners-up New Zealand, he had figures of 4-0-13-1. He got a wicket with his first ball. Let alone a boundary, he did not concede even a two.

Today’s performance against the West Indies, thus, does not come as a surprise. If anything, it firmly establishes Watt’s place as one of the finest operators in the history of the tournament.

This is not an exaggeration: with a 45-over cut-off, Watt has the second-best economy rate (5.82) in T20 World Cup. Samuel Badree (5.52), the only man ahead of him, was one of the early giants of the format: they played in almost entirely different eras, for Watt’s first World Cup was Badree’s last.

It would have been easy for Watt to be the quintessential tall, defensive finger-spinner. You know the package: run up to the crease, make full use of that high release point, bowl flat and fast ‘darts’, perhaps vary the pace a bit, send down four quick overs. Most squads, even in domestic cricket, seem to have one.

Wrist-spinners, while more dangerous, are also a novelty, and are often less accurate than their finger-spinning counterparts. And unlike off-spinners, left-arm spinners can take the ball away from the right-handers, who outnumber left-handed batters. Left-arm spinners, thus, are the ‘staple’ choice for most teams.

But Watt chose to rise beyond the average. His variations of pace and length are comparable to the best in business. He makes judicious use of the bowling crease, not merely its breadth but also its depth. He even reduces the crease to redundancy by bowling from behind it, effectively extending the bowling pitch to 24 yards or beyond.

Imagine the plight of the batter not used to such tactics. They take time to predict the length. To make things worse, on a hard wicket, the tall Watt can also make a ball rise awkwardly. If the ball pitches shorter than you expect you to be, you stand with little chance.

It has not been easy to master. “Everyone in the nets tries to hit it to the moon so I was a bit scared bowling it in games, but it seems to work. The batter is looking down at his toes, then looks up and the ball is halfway through its flight,” he told Wisden last year of his behind-the-crease ball.

Of course, this was far from being a novelty. In the mid-1990s, roughly the time around Watt’s birth, Saqlain Mushtaq confounded batters around the world in ODIs using the same strategy. Several others have tried it in the interim period, but none of them had honed their skills on Scottish pitches that offer little to the spinners.

Of course, none of that could deter him from trying it out: “It might be a bit cheeky bowling from 25-26 yards, but if it gets me a dot ball in T20 cricket, I’m going to try and keep doing it.” And once it worked, he never stopped.

And today, at the large Bellerive Oval, Watt arrived equipped with his repertoire, strategies, and a piece of paper that he took out periodically throughout his spell. It might have been for the cameras, but the message was clear: Watt, and Scotland, had done their homework.

Scotland had scored 160-5 earlier in the day. Watt bowled the first over. He hit both Kyle Mayers and Evin Lewis on the pads, inducing loud appeals from his teammates. There was a solitary run.

At 53-1 in the sixth over, West Indies seemed comfortably placed. Brad Wheal pegged them back with the wicket of Lewis, but West Indies batted deep, and when Watt finally came on, they needed 104 in 78 balls.

Nicholas Pooran attempted a pull against his first ball, one that was too full for it. He survived a leg-before appeal. Three balls later, Brandon King tried to cut one – again, he misread the length of the 24-yarder – and was bowled. With threats of rain looming, the wicket was important, for it changed the Duckworth-Lewis-Stern calculations. This over went for two runs.

By the time he returned, the West Indies were 79-7. Watt put an end to whatever doubts there had been over the outcome. He got Alzarri Joseph first ball with a 24-yarder and found Jason Holder’s edge, though it ran for fou).

He saved his best for the last. With eight wickets down and the asking rate skyrocketing, West Indies’ hopes – if any – rested on Odean Smith. Watt bowled straight, on off-stump; and Smith, running out of time, had little options but to go for it.

Unfortunately, the Bellerive is a large oval, and hitting the ball straight and high involves having to clear a very long boundary. Even Smith’s incredible power turned out to be inadequate, for Watt had bowled from behind the stumps yet again.

A hat-trick of 24-yarder wickets now for Watt. Odean Smith out driving to long-off with it. pic.twitter.com/xD0I6ijpB0

A simple, logical counter to big hitting, based on the laws of mechanics, if one thinks of it. And as it turned out today – and many times before – effective, too.