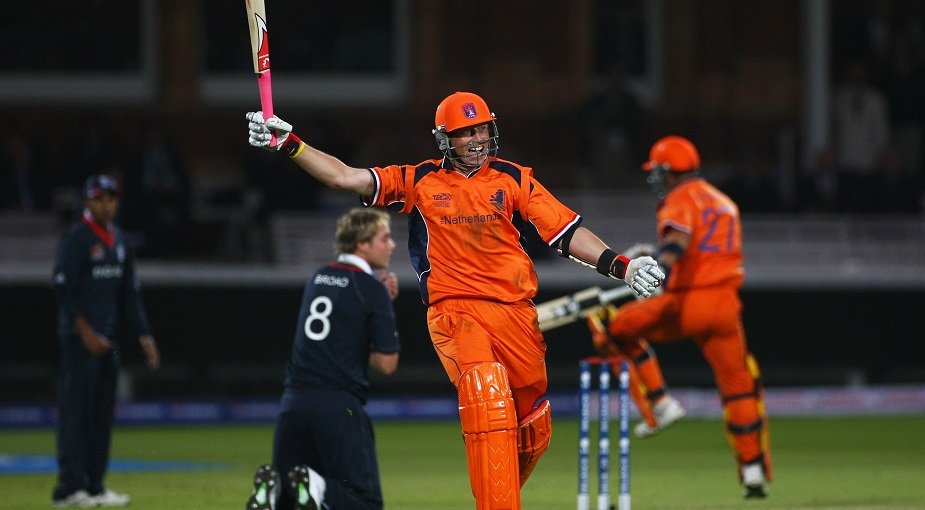 Namibia’s 55-run win against Sri Lanka in Geelong has set a high bar for the 2022 T20 World Cup. It was also in tune with a long line of upsets in the men’s edition of the tournament.

A Twenty20 match lasts a maximum of 240 legal deliveries, fewer than an ODI innings or two sessions of a Test match. The probability of the weaker of the two sides prevailing is, thus, higher in Twenty20 cricket than in the longer formats. To add to that, World Cups often bring together teams that would not have faced each other otherwise, bringing in an additional factor of unpredictability.

Over the years, thus, the T20 World Cup has witnessed many an instance of the weaker team prevailing. Here is a list of the ten biggest shocks, ranked in reverse order.

Both teams had felled major oppositions in the 50-over World Cup two years ago. However, while Bangladesh had been an ICC Full Member for almost nine years, Ireland were playing their first match in the history of the tournament. Yet, Trent Johnston (4-0-20-3) soon reduced Bangladesh to 90-6 in Trent Bridge before Mashrafe Mortaza lifted them to 137-8 with a 16-ball 33.

As was often the norm in World Cups during this phase, the Irish win was set up by the O’Brien brothers. Niall (40 in 25) kept them on track after an early wicket fell. Ireland lost three more wickets before Kevin (39* in 17) blasted them to a win with 10 balls to spare.

By 2016, Ireland were on the verge of attaining Full Member status, and were strong favourites against Oman. Yet, they failed to come to terms with their Middle Eastern opponents. Ajay Lalcheta (4-1-24-0), bowling very slow loopy left-arm spin that lost even more pace off the Dharamsala pitch, started with a maiden over. Trying to force the pace, the Irish lost wickets against seamer Munis Ansari (4-0-33-3) to finish on 154-5.

Oman still needed a batting boost, and it seemed Ireland’s match when they slumped from 69-0 to 90-5. But as Jatinder Singh stayed put, Amir Ali took Oman closer to the target. With 14 to defend off the last over, Max Sorensen bowled a no-ball and conceded two boundaries before having Amir caught-behind. Oman still needed three in two balls, but Sorensen bowled a no-ball that beat both the batter and the wicketkeeper and ran for four.

Yet another upset by a tournament debutant – though this time it came after hosts Bangladesh had almost qualified for the Super 10 and Hong Kong had been eliminated. Asked to bat in Chattogram, Bangladesh reached 85-3 before being bowled out for 108 by left-arm spinner Nadeem Ahmed (4-21) and leg-spinner Nizakat Khan (3-19).

But Shakib Al Hasan (4-0-9-3) hit back, and soon Hong Kong were 50-5. They found an unexpected messiah in Munir Dar, a 40-year-old Omar Sharif doppelganger, banned from bowling for an illegal action, and playing his second (and last) T20I. He found the gaps, ran hard, collided with Mushfiqur Rahim while running, needed medical assistance, ate a banana on the ground, and hit three fours and a six. He fell for a 27-ball 36. Hong Kong won with two balls in hand.

Even in the early stage of Twenty20 cricket, it was obvious that it would come naturally to the big-hitting West Indians. In the first ever match in the history of the tournament, against South Africa, Chris Gayle had slammed the first ever T20I hundred and they posted 205-6, and – amazingly – lost.

Despite that, a win against Bangladesh would have seen them through. Instead, they became the only ‘seeded’ team to not qualify for the Super 8s. They lost Gayle early, but as Devon Smith (51) batted deep into the innings, a young Shakib (4-25) took out the middle order one by one. Dwayne Smith (29 in seven balls) eventually took them to 164-8 in Johannesburg.

Bangladesh soon became 28-2, but not for the first time did Mohammad Ashraful (61 in 27) play a blinder against a quality team. And once Ashraful fell, Aftab Ahmed saw them through with a 49-ball unbeaten 62.

As with 2022, the opening day of the 2021 edition witnessed an upset. Asked to bat in Al Amerat, Scotland quickly became 53-6 before Chris Greaves’ late onslaught (45 in 28) took them to 140-9. After Bangladesh lost early wickets, Shakib and Mushfiqur added 47, but let the asking rate mount in their attempts to keep wickets in hand.

Mahmudullah contributed towards the crawl. Between them, the three stalwarts scored 81 in 86 balls against a Scottish attack led by Brad Wheal (3-24). In the end, they lost by six runs.

England were already out of the race for the semi-finals. To make things worse, captain Stuart Broad had been fined 15 percent of his match fees for criticising the umpires after they allowed the New Zealand match to continue despite thunderstorms. England’s disappointing performance, followed by another in Australia in 2015, prompted a system overhaul that would lead to significant changes in their approach towards limited-overs cricket.

To be fair, England did well in Chattogram to restrict the Dutch to 133-5 after they were 110-2 in 16 overs. With 3-24, Broad himself led the way. The England openers added 18 before Mudassar Bukhari (3-12) took two wickets in two balls. Logan van Beek (3-9) joined in, and England were astonishingly shot out for 88 inside 18 overs. This remains the lowest all-out score for an ICC Full Member against an Associate.

True, Zimbabwe had felled many an opposition before in the 50-over World Cup. In fact, that list began with Australia, in 1983. But this was an Australian side that had not lost a single match in two entire World Cups – with the streak stretching a few more matches into the one before that. Earlier that year, they were absurdly far ahead of any other side in the tournament.

But as the Australians found out, this was a different format altogether. Four years ago, Tinashe Panyangara and Elton Chigumbura had bowled out Australia for 73 at the Under-19 World Cup. There was no Panyangara this time, but Chigumbura (3-0-20-3) took out Matthew Hayden and Adam Gilchrist with his first eight balls. With Gary Brent (4-0-19-2) also chipping in, it took Australia every effort to make it to 138-9.

Then, after Vusi Sibanda (23 in 15) helped Zimbabwe get off the blocks quickly, Brendan Taylor batted through the innings with an unbeaten 45-ball 60. It came down to 12 off the last over, but Taylor swept Nathan Bracken for four, and somehow found four leg-byes off the penultimate ball to seal the match.

The Sri Lankan top order was then undone by Ben Shikongo, who started with a double-wicket maiden. From there, the Namibians took the pace off the ball, inducing the Sri Lankans to go for the big shots in the large, elliptical Kardinia Park. Sri Lanka collapsed to 108. Six out of their last seven wickets were products of mistimed slogs.

West Indies played six matches to win the 2016 edition. They beat England (twice), Sri Lanka, South Africa, and India. Yet, they lost against the only Associate they faced in the edition, in Nagpur, in their first ever match against them.

There was nothing intimidating in that Afghan score of 123-7 either. The Afghans found Samuel Badree (4-0-14-3) impossible to score off before Najibullah Zadran (48*) led a revival of sorts, but it was not expected to be more than a face-saving effort. And when Johnson Charles hit two sixes in the second over, bowled by Mohammad Nabi, the West Indies seemed to be on course.

But Amir Hamza (4-0-9-1) turned out to be the thorn in the flesh. A teenage leg-spinner called Rashid Khan took a wicket with his second ball, and struck later again. Nabi returned to compensate for his first over. The Afghan spinners did not relent. Andre Fletcher retired with a pulled hamstring. By the time he returned, it was too late.

A post-match touch made the triumph even more special: as the winning side celebrated, Gayle – rested for the match – danced and posed for selfies with the Afghans.

How did England lose this match? Having invented the format, they had a headstart over any other team in the world. They were playing at home. Later that year, they would embark upon their hat-trick of Ashes series wins. In this tournament, they would beat eventual champions Pakistan and defending champions India. They would win the trophy themselves next time around. The Dutch, on the other hand, were playing their first ever T20 World Cup match.

England should probably have scored more than 162-5 after Ravi Bopara (46 in 34 balls) and Luke Wright (71 in 49) added 102 in 68 balls for the opening wicket. And they should have been out of sight when they reduced the Dutch to 23-2. The Netherlands turned things around, but even after Tom de Grooth’s 30-ball 49, Peter Borren’s 25-ball 30, Ryan ten Doeschate’s 17-ball 25 not out, England were still in it despite missing what seemed like a hundred run out chances.

Broad had to defend two from the last ball. Edgar Schiferli, with no serious reputation as a batter, hit the ball back to him. The Dutch pair ran – they had to – but Broad had plenty of time and three stumps to aim at. He missed entirely, and with no one backing up, the batters got the extra run as well. Cue pandemonium and shocked faces at Lord’s.

Quiz! Every Player To Bowl The Last Over In A T20 World Cup Final